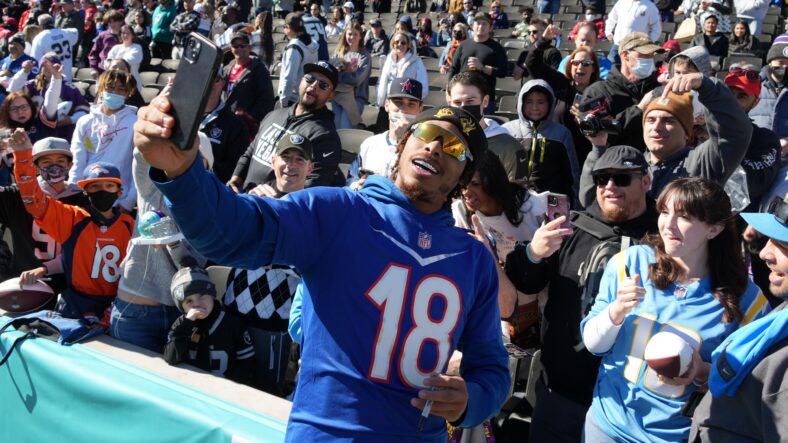 The Minnesota Vikings flew to London on Sunday to beat the New Orleans Saints in a football game. While there is plenty to be desired regarding the Minnesota offense as a whole, none of that was directed at Justin Jefferson.

After easily driving down the field for a touchdown on their first possession, Minnesota’s offense grew a bit stagnant. Coming close to halftime, star wide receiver Justin Jefferson had just two catches. The New Orleans Saints have somewhat of a shutdown cornerback in Marshon Lattimore, and he was holding Minnesota’s playmaker down.

Then the show began.

Justin Jefferson caught 10 passes for 147 yards, absolutely torching the defense. Lattimore gave up seven of those receptions and 93 of the yards, a performance no one had put up against him in quite some time.

Following the epic performance at Tottenham Hotspur Stadium, the man who helped make “The Griddy” famous had some fun on Instagram. Using the iconic Allen Iverson step-over image against Tyron Lue, Jefferson said, “Ain’t no question, im the answer!”

Teammates K.J. Osborn and Eric Kendricks showed up in the comments with some fun additions of their own. It’s hard to deny what Jefferson is doing in the NFL as being among the best in recent memory. The LSU product has burst on the scene, and from the minute his training wheels were taken off, there’s been no looking back.

Through four games this season, Jefferson has 28 receptions on 42 targets with 393 yards and two touchdowns. Left oddly out of the gameplan against Detroit in Week 3, receiving only six targets, he re-emerged in a big way this weekend.

Kevin O’Connell and Kirk Cousins would be best served to continue getting their playmaker the ball.