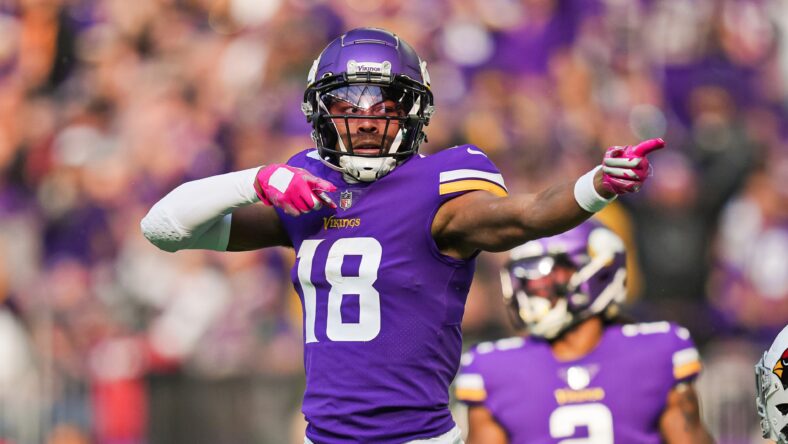 While doing my weekly Vikings players’ reactions, I quickly realized there was no room for Justin Jefferson. After the game, everyone wanted to speak to him, and he had plenty to say.

He was going to need a reaction piece all to himself. That’s how impactful he was on yesterday’s game when he left no doubt that he is a bonafide superstar and possibly the best wide receiver in the NFL.

It might not have been primetime, but all eyes were on the Bills-Vikings, especially as the 4th quarter ended and we went to overtime. Jefferson delivered in a colossal way finishing the game with 10 catches for 193 yards and a touchdown, delivering on my prediction that he would have a bigger game than Stefon Diggs.

More importantly than that, he came up with big-time plays in the most significant moments. Pro Football Focus gave him an overall grade of 91.1, matching his highest grade of the season, which came against Green Bay in Week 1.

Here is how Jefferson reacts to a monster day in Buffalo.

For all the hype surrounding Jefferson — and it is well deserved — it has always been abundantly clear that he is a team player. On Sunday, he became the first player to have 20 100-receiving-yard games in his first three seasons. Surpassing Randy Moss and Odell Beckham Jr, however, as many personal accolades he collects, it’s all about the team and winning for Jefferson.

The former LSU man, a national champion in college, is used to winning. The Vikings were never in contention during his first two years in Minnesota. Jefferson often cut a frustrated figure but not anymore. This Vikings team is winning and is full of belief and excitement. The Vikings star wideout is thriving in this new environment.

There was even time for fun fan interaction with a shirtless, chain-wearing fan. I also believe Kirk Cousins went over to see the same fan.

Of course, we have to talk about that catch. Maybe there’s a hint of Vikings bias; I don’t know, but it’s the greatest catch I have ever seen. By itself, it is up there but considering the circumstances, 4th and 18 with the game on the line. It goes beyond anything I have ever witnessed. Jefferson himself referred to the catch as crazy.

Unsurprisingly, Jefferson was in a confident mood after the game. His words, “Whenever Kirk throws that ball up, it’s mine.” Are what every Vikings fan wants to hear. Speaking to the media postgame, head coach Kevin O’Connell alluded that there is no scheme for 4th and 18 in that situation. He relayed the plan to his quarterback to give our best player a chance. The Vikings offensive line held up and gave Cousins the time to make a throw. He gave Jefferson his chance, and boy, did he deliver.

Jefferson is a confident man. He believes himself to be the best, and with seven straight wins, he has every reason to believe in his teammates. There have undoubtedly been some moments of good fortune along the way. However, plenty of things have gone against the Vikings, but they have overcome them. For example, the Gabriel Davis catch that wasn’t a catch on the drive at the end of the 4th quarter. That led to the field goal that leveled the game.

The margins between success and failure in the NFL are slim. When you overcome adversity and have little things go your way at the right time, you have every right to believe when you keep finding different ways to win week after week. There is a long way to go, but the Vikings winning the Super Bowl isn’t a fanciful dream anymore. They are contenders, and if you want to check your own expectations, that is fine.

Jefferson won’t; he’s a winner, and he believes.