Justin Jefferson Is Ready for a Record-Setting Monday Night 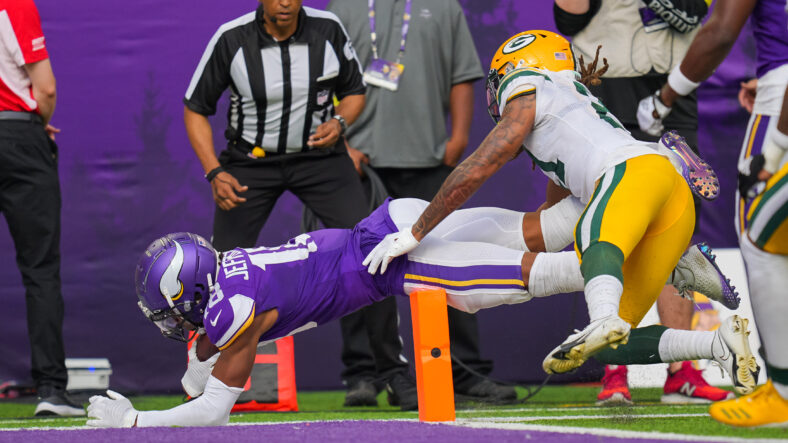 Coming off a Week 1 performance that saw Minnesota Vikings superstar wide receiver nearly post 200 yards and a pair of touchdowns, it’s crazy to think he hasn’t scratched the surface, but here we are. If his recent remarks are to be believed, we could be in for a treat.

Through Week 1 of the 2022 NFL season, Justin Jefferson owns the lead in receiving yards. He came into the regular season as the betting favorite to do so over the course of the season per Bovada, and it’s hardly a bad first act to assert himself the way he did.

In talking to reporters on Friday following Minnesota Vikings practice, Jefferson said, “I like to have my best games when the whole world is watching.”

While most National Football League games generate massive viewership numbers, it’s the primetime action that truly takes center stage. When Minnesota kicks off in Philadelphia, they’ll be broadcast across the country on Monday Night Football.

For Jefferson to have his best game, at least yardage-wise, he’d need to trump what he did just a week ago. The 184 yards on nine receptions in Week 1 set a new career high by just two yards. Jefferson surpassed his 2021 output of 182 yards on 11 receptions against the Detroit Lions. His two touchdowns were also a career-high but tied a mark he had previously reached three other times.

As we’ve seen with Cooper Kupp in Los Angeles, Kevin O’Connell’s strategy has been to feed his playmakers. While the Vikings also have Dalvin Cook and Adam Thielen to share the rock, it can be expected that Jefferson will have all the opportunities he can handle every week.

Former Detroit cornerback Darius Slay will likely be tasked with attempting to shut Jefferson down, and he’s a very good one. Look for O’Connell to find ways for Jefferson to get in space and create opportunities for quarterback Kirk Cousins. It’s probably a more difficult matchup than Jaire Alexander in Week 1, but it’s to the point where Jefferson may be matchup-proof.

I’m not sure how Jefferson tops what we saw him do against the Green Bay Packers, but if Minnesota is coming home with a big road victory, a new set of career highs would be a welcomed development along the way for their talented wide receiver.