Justin Jefferson Gets Early Whiff of Hall of Fame 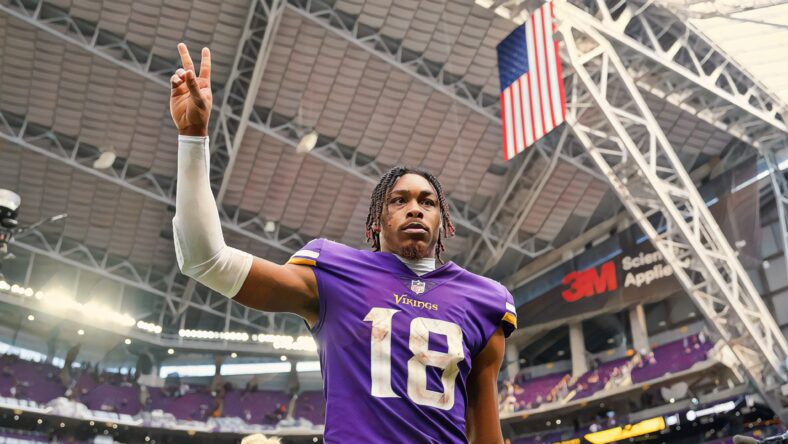 The Minnesota Vikings and Buffalo Bills Week 10 showdown was so wild that the Hall of Fame wants a little bite of the action.

The game showcased a Vikings erasure of a 17-point deficit late in the 3rd Quarter, Justin Jefferson’s catch of the century, about six points of “okay, this game is over,” and generalized wackiness.

And because Jefferson became the man of the hour with his heroic catch, Canton summoned some of the 23-year-old’s belongings. Foremost, this was the catch:

The reception was Odell Beckham’s legendary grab from 2014 — with a defender draped on Jefferson sharing custody of the pigskin. To commemorate Jefferson’s newfound holiness, the Hall of Fame will display the man’s gloves and arm sleeve.

Moreover, Jefferson is already carving a Hall of Fame resume, tabulating more 100-yard games than anyone in history through a player’s first three seasons. He’s a mainstay of the Vikings offense, rapidly approaching status as the NFL’s top wideout. Only Tyreek Hill — arguably — stand in the way.

Have a look at Jefferson’s historic pace through 42 games played. The company is grand.

Jefferson trails in the touchdown department but makes up for it with the “wow” aspect, evidenced by the unthinkable grab at Buffalo. Too, he’s hit a point in his young career where a 7-reception, 95-yeard game (or so) feels blah. That’s rarified earth for an NFL wide receiver.

The LSU alumnus is on an emphatic track to reach the Hall of Fame as a member, and the request by Canton for his wardrobe in Year No. 3 is a telling omen.

The Vikings host the Dallas Cowboys in Week 11. Jefferson needs 88 yards to total the most receiving yards by a player in his first three seasons in NFL history.

Dallas is favored by a point and a half.