ESPN ranked the top 25 players under the age of 25 years. Analysts Matt Bowen, Matt Miller, and Jordan Reid teamed up and created the list. They all created individual rankings and combined the results into one extensive list.

The Vikings have a history of having exciting young players on their team. The AP Offensive Rookie of the Year award has been handed out since 1967, and five Vikings received the honors. In 1973, Chuck Foreman was the first to win it, followed by Sammy White in 1976, Randy Moss in 1998, Adrian Peterson in 2007, and Percy Harvin in 2011. No Viking has ever won the award on the defensive side.

However, players can have fantastic careers without winning that award. Justin Jefferson lost to Justin Herbert in 2020, a decision that led to controversies. Clearly, quarterbacks are the preferred winners of the honors, and Jefferson never had a chance despite breaking the rookie record by piling up 1,400 receiving yards.

In ESPN’s rankings, Jefferson comes in second. His numbers speak for themselves, and the respect he’s deservedly receiving week in and week out from opponents is remarkable. Consistently putting up big numbers while getting double-teamed on virtually every play is an outstanding feat.

A true difference-maker in the Vikings’ offense, Jefferson has the ability to take over games. We can look at the savvy route running traits, the vertical juice or the ability to make contested catches. He wins at every level of the field. And with three straight seasons of over 1,000 yards receiving, Jefferson is already one of the league’s best at the position. According to NFL Next Gen Stats, he has made 23.5 receptions over expectation during his career, and his 4,248 receiving yards tops the NFL since 2020 by more than 300.

Jefferson came into the league as a dominant route runner and improved all areas of his game. Drops became a rarity after he was amongst the league leaders in drops in his first two seasons, his yards after catch look like those of a running back, and he’s unstoppable on contested catches just a month after some people criticized him for not coming down with enough of them.

The only better play in the eyes of all three analysts is Cowboys defender Micah Parsons. Every one of them has him at the top of their lists. Vikings fans shouldn’t be mad about the rankings and, instead, appreciate the greatness of both players. The second-year star linebacker came into the league as a true linebacker but is used as an edge rusher. It’s rare for players to be able to play both positions at an All-Pro level.

The Vikings saw his talent first-hand just a week ago when he went up against Christian Darrisaw and later Blake Brandel. He finished with nine pressures, five hurries, and two sacks. Parsons is currently second in the league in sacks behind only Matthew Judon and may be the best defender in the game.

The second Vikings player on the list is Christian Darrisaw. He entered the league in the same draft as Parsons, and former general manager Rick Spielman saw him falling right into his lap. Darrisaw didn’t play at the beginning of his career because of a core surgery. However, once he started to play in Week 5, he was a massive upgrade on the offensive line. He dealt with some normal rookie struggles, especially in pass protection. Darrisaw made a huge jump in his second year and became an elite offensive tackle.

Darrisaw has the traits to develop into one of the league’s top players at the left tackle position. He’s an easy mover who can smoothly climb to the second level in the run game, with the body control and lateral foot quickness to match pass-rushers. Darrisaw has registered a pass block win rate of 86% this season, up from 77.6% in his rookie year, and he has allowed just one sack in 2022.

Surprisingly, Darrisaw is ranked 23rd on the list. His play in the 2022 season has been remarkable, as the Vikings often leave him on an island one-on-one with the opposing top pass rusher. He still handles all of them. In the running game, Darrisaw simply pushes defenders out of the screen and ultimately eliminates them from the play. Opponents regularly land on their backs.

Darrisaw ranks second of all offensive tackles in PFF grade, only trailing Trent Williams. When comparisons appeared in the offseason between the two, most fans thought it was an outlandish take, but a few months later, they seem much more valid.

Darrisaw exited the Cowboys game with his second concussion in a couple of weeks and was immediately ruled out for the game against the Patriots. The Vikings are being cautious with their star player. His next opportunity to play will come on Sunday against the Jets. 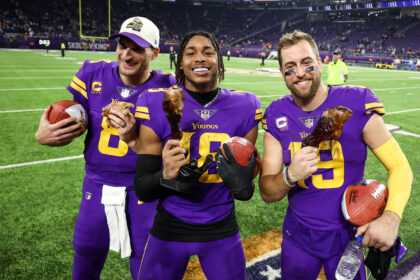