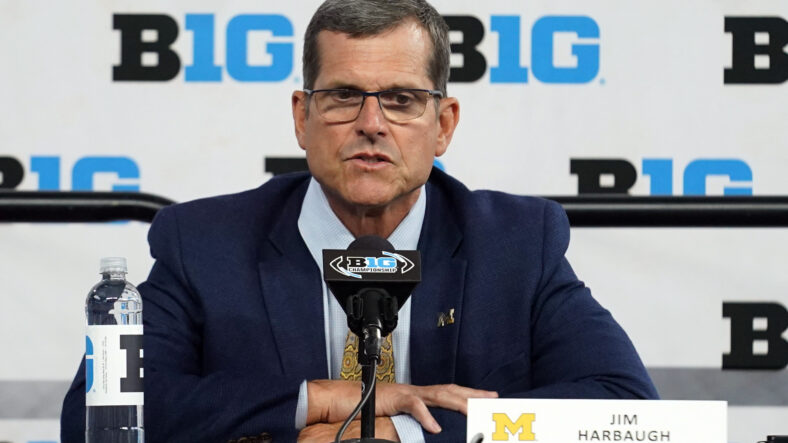 Before Kevin O’Connell signed on the dotted line, Michigan Wolverines head coach Jim Harbaugh felt like a shoo-in to become the Minnesota Vikings next skipper.

Tweets like this from February implied the Harbaugh-Vikings marriage was all but a done deal as Minnesota looked for its next leader after the dismissal of Mike Zimmer.

And although Harbaugh interviewed with Vikings brass for the better part of a day in February, the two parties never came to a deal, and Harbaugh boarded a plane back to Ann Arbor, where he’d later sign a contract extension with the Wolverines. In some ways, the charade felt like a ruse. Minnesota opted for O’Connell and his Super Bowl-winning resume from the Los Angeles Rams. HarbaughMania stayed on the ash heap of Vikings what-if history.

But the allure of interviewing with the Vikings was very real for Harbaugh, whose team kicked off the 2022 collegiate season by eviscerating the Colorado Rams (51-7) on Saturday. By way of Pro Football Talk, Harbaugh told ESPN’s Gene Wojciechowski this weekend about the Vikings adventure, “I don’t apologize for taking a look. And the one that doesn’t get printed is I don’t apologize for wanting to be at Michigan. Seem to cut off that last part of it. And that’s where [I’m] at, happy as can be.”

Harbaugh also opined about not winning a Super Bowl a decade ago, “One of the things that was really kind of driving me is, you know, we were in San Francisco, we got that close to winning the Super Bowl. That’s always been a thing. There’s unfinished business there.”

The San Francisco 49ers were a whisker away from knocking off the Baltimore Ravens in 2012 during Super Bowl XLVII, a Ravens team showcasing former Vikings Bryant McKinnie and Matt Birk. San Franciso never returned to the big game, and Harbaugh landed with Michigan in 2015.

While the exact reason Harbaugh didn’t become the Vikings head coach may never be known, it’s a safe bet to assume he was “too much like the old way.” Minnesota ended up hiring Kevin O’Connell, philosophically and stylistically very much the anti-Harbaugh. O’Connell is even-keeled while Harbaugh is, well, not.

Plus, Harbaugh may have been pegged as a continuation of the Zimmer era. During the general manager and head coaching search, the Vikings made it clear that they wanted collaboration and culture over hardnosed-ism and nostalgia.

The Vikings get an early look at their decision to hire O’Connell over Harbaugh in one week when the 2022 regular season kicks off, hosting the Green Bay Packers in Week 1. The Packers are favored by two points.

Harbaugh is the NFL’s fifth-best coach of all-time per win percentage (.695)