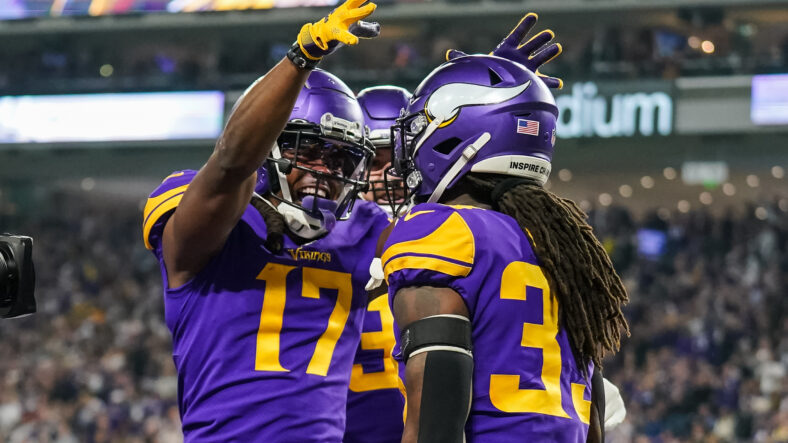 After missing the postseason in back-to-back years, the Vikings are eager to go back to the playoffs in the 2022 season. A lot of things have to go right in offense and defense. Here are some predictions about the Vikings in the upcoming season, in no particular order.

Despite a stellar breakout campaign in 2021, Osborn is still flying under the radar. He’s going undrafted in most fantasy leagues, which is a good indicator of his status in the NFL world. Last season, he finished with 655 receiving yards and seven scores after not playing a single offensive snap in his rookie year in 2020.

His role is likely to increase because the Vikings are expected to play a lot more with 11-personnel or sets with three wide receivers. Osborn was the most effective slot receiver last season, and that position is important in the new scheme. Cooper Kupp, most famously, won the triple crown as a slot receiver. Justin Jefferson will get a ton of targets, and he can play in the slot as well, but Osborn’s blocking skills could earn him a significant role.

It’s even possible that he outproduces veteran Adam Thielen. The Vikings have a dynamic trio, not just a duo at the receiver positions.

Cornerback Cameron Dantzler won the starting job in training camp. He opened and ended camp as a starter. Most envisioned Booth to usurp him at some point, but the rookie struggled with consistency and also dealt with some injuries. He has since been jumped on the depth chart by fellow rookie Akayleb Evans. This prediction foresees Dantzler as a starter all year, barring injury, obviously, and also expects to see some development. He’ll be a solid starter and maybe even a true number one cornerback. He has shown that potential in his rookie season before he landed in Zimmer’s doghouse.

In his first two years, tight end Irv Smith Jr. split time with starter Kyle Rudolph and wasn’t used correctly. His role was mainly a security blanket for quarterback Kirk Cousins. That role fits Rudolph but not Smith. The former Alabama Crimson Tide is a vertical threat with great athleticism.

In 2021, he was supposed to enter his breakout year but missed the full season because of meniscus surgery. Another shocking moment occurred in training camp when he went down with a thumb injury and even required surgery. He was quickly ruled out for the preseason but has always been expected to be healthy for the regular season. After a year’s delay, he’ll finally have his breakout season.

While that prediction doesn’t seem to be a positive one, it could very well be a positive thing to see more interceptions from quarterback Kirk Cousins. The veteran did a great job of taking care of the football in 2021 and just threw seven interceptions. About half of them weren’t even his fault, as receivers dropped the passes into defenders’ hands.

Of course, limited interceptions are the goal. However, Cousins should take a few more risks, even if it results in a turnover. Given the receiver talent on the Vikings’ roster, it’s not a bad thing to throw 50-50 balls, especially on third down. More interceptions won’t automatically mean better QB play but Cousins might be the rare exception to the rule. He’s been more aggressive than the narrative around him suggests, and the production is remarkable, but there’s some potential left on the table.

This is not a popular prediction. The perception in the fanbase is that Garrett Bradbury is on a short leash. However, the team hasn’t brought anyone in who is potentially a better option, and it’s not easy to upgrade during the season. His struggles are well documented, and he won’t suddenly gain 30 pounds and be able to hold up against bull rushes, but his skills in the running game are underrated. Especially in reach blocking, he’s one of the best in the business thanks to his athleticism.

While he may deserve to be benched, it would take a catastrophic performance. Something he’s totally capable of having, but the team will accept his flaws and focus on his strengths.

Defensive tackle Harrison Phillips was one of the first signings of Kwesi Adofo-Mensah. After cutting ties with Michael Pierce, Phillips was brought in to play the nose tackle position. Most thought this would be a lateral move. However, Phillips has shown his disruptive potential in the training camp, where he dominated the aforementioned Bradbury.

Even in the preseason, he needed just two defensive series to show his abilities. His power stands out. Defensive tackles usually don’t get the attention of the glamorous edge rushers. He’ll play like a Pro Bowl-caliber player.

Running Game Is a Big Part of Offense

A lot of talk during the offseason and preseason was about the new offensive scheme and the number of passes in the upcoming season. All of that may be true. However, the Vikings running game will still be an essential fixture of the offense, especially Dalvin Cook. The star running back is one of the best players in the business, and the coaching staff knows that. Cook is one of the very few backs that can dominate a game and almost singlehandedly win it. Expect him to get fewer carries but more catches.

His backups, Alexander Mattison, Ty Chandler, and Kene Nwangwu, will also be parts of the offense in a backup and rotational role. All of them have shown so much promise that the Vikings kept them all on the roster. C.J. Ham is another contributor, as he’s a great blocker and a skilled runner and receiver.