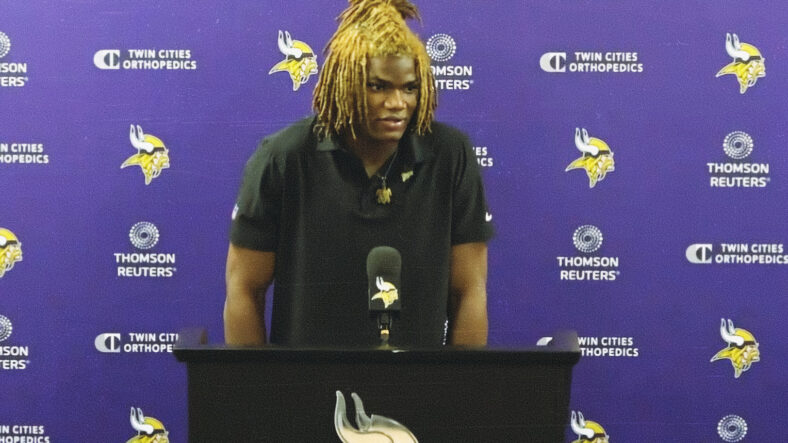 The 2022 Vikings defense is a peculiar thing. In Week 1, they kept Aaron Rodgers and the Green Bay Packers to just seven points. They followed that by conceding 24 points to the Philadelphia Eagles and Detroit Lions, leading to differing results.

Through three weeks, Minnesota’s defense has been a mixture of the good, the bad, and the downright ugly. One thing noticeable has been the absence of this year’s rookies. As we enter Week 4, it’s time to unleash the Vikings defensive rookies.

There have been injury setbacks for Lewis Cine and Andrew Booth, and it looks like Booth will miss another game at least. Cine is raring to go, and after only playing on one defensive snap so far, it’s time to get him involved. I’d also like to see Brian Asamoah on the field. His speed and hard-hitting, evident on special teams, can be a real asset for the defense, especially in run defense, where the Vikings are still having some troubles this season.

The rookie who has seen the field the most is fourth-round corner Akayleb Evans. He played in 6 defensive snaps in Week 1, following that with 21 in Week 2. The second game increase came after he replaced Cameron Dantzler after he made a mistake that led to a touchdown. In explanation, the coaching staff communicated that it was always the intention to get Evans playing time. So his absence from the field in Week 3 — where he only played special teams snaps — was a bit of a surprise.

I’m not advocating for the rookies to be thrust into starting roles. After all, the case can be made that the Vikings defense is playing well despite the statistics suggesting otherwise. The Vikings rank 25th in the NFL using Football Outsiders DVOA metric. They are 30th in total yards allowed per game at 413.3. They’re giving up 6.0 yards per play, tied for 26th. They have allowed 137.7 rushing yards per game and 275.7 passing per game. However, the defense only allows 18.3 points per game, which is tied for ninth best in the league.

Stats are great, but points and winning games are what’s most important. The Vikings defense has been stout and stepped up to make big plays when it matters most on several occasions. They have allowed the sixth-fewest second-half points across the league through three weeks, which is a considerable improvement on the last two seasons where the Vikings defense was porous during the second half of games. Incredibly, the Vikings haven’t given up a single point in the fourth quarter thus far.

Is it sustainable to give up so few points while giving up so many yards? The Vikings defense employs a ‘bend but don’t break’ philosophy. It has worked to a certain degree, but I would suggest they can’t keep giving up so many yards, especially when they come up against the most high-powered offenses in the league.

Getting the rookies into the rotation on defense could potentially improve things. Cine, Booth, Asamoah, and Evans are all playmakers. Can they make the difference for this Vikings defensive unit?