It May Be Time to Unleash Dalvin Cook 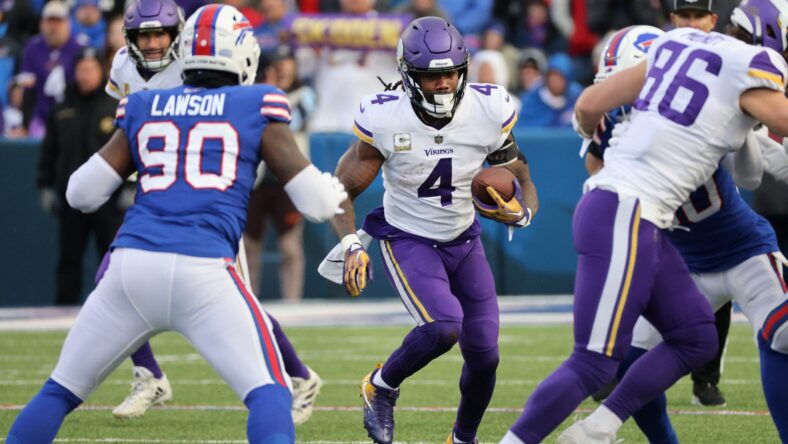 Heading into Thursday night’s contest against the New England Patriots, Minnesota Vikings running back Dalvin Cook has taken somewhat of a back seat in Kevin O’Connell’s offense. He’s averaging career lows in multiple categories, but some of that is self-inflicted from his own sideline. Is it time to unleash one of the NFL’s most dynamic running backs?

Ten games into his 2022 NFL season, Dalvin Cook has 799 yards to his credit. He’s trending toward the second-most rushing yards of his career, but that’s mainly because he’s remained healthy and has an extra game to play. His 79.9 yards per game are a career low, and without a career-long 81-yard rush against the Miami Dolphins, his totals would be even more futile.

Truthfully, it’s less on Cook than on game-planning to this point. With a 5.1 yards per carry average, Cook has posted the best total of his career. Generating a first down every two times he totes the rock is something truly impressive in and of itself. Unfortunately, his 15.6 attempts per game are only higher than 2018, his second season in the league. Although Mike Zimmer opted to slam his back into the back of a lackluster offensive line more often than not, O’Connell has decided to use Cook less than ever during his career.

Indeed, usage for Cook could be by design. After all, he has never played more than 14 games during a single regular season, and it remains to be seen if he can top that mark with seven to go this year. That said, there’s no doubt his legs should be fresh, and he should feel capable of carrying the load when counted upon. That could come Thursday night when the Vikings will be looking to avoid one of the best pass rushes in the entire league.

Being stout up front, New England has done an excellent job controlling the opposition on the ground. They rank 11th in the NFL in rush yards allowed and are in the top ten when it comes to rushing attempts. Only the Tennessee Titans have allowed fewer touchdowns on the ground than Bill Belichick’s squad. Still, if the Vikings hope to keep pressure off their backup left tackle and want Kirk Cousins to stay upright, they’ll need Cook to be heavily involved.

Some thought Cook might be utilized more as a pass catcher under O’Connell, a talent he clearly possesses. In that vein, however, Cook has averaged a career-low 2.2 receptions per game, and his 14.6 yards per game through the air is far from a career-best 37.1 in 2019. If Minnesota doesn’t try stretching the field on the ground, Cook may help by catching passes out of the backfield.

Either way, the superstar moments from a Pro Bowl back have been few and far between this year. Knowing that the offense will need to look substantially different than it did a few days ago against the Cowboys, finding ways to get Cook involved may provide the key to victory.