Hype for Vikings 2022 Offense Is Vivid 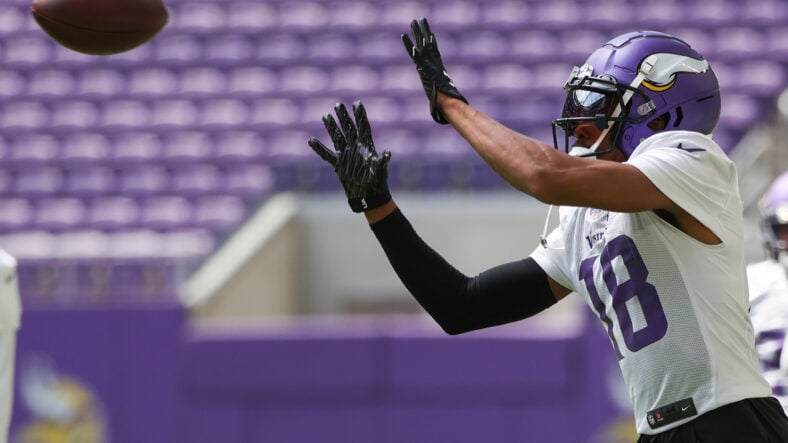 While the defense remains a relative mystery, hype for the Minnesota Vikings 2022 offense is vivid, evidenced by rankings from Football Outsiders this week.

Football Outsiders is an NFL analysis site that “gets in the weeds” of statistics, metrics, and projections. And according to FO, the Vikings waltz into 2022 with the league’s seventh-best offense.

Indeed a lofty prediction, Minnesota used the 2022 offseason to become more offensive-minded, hiring Kevin O’Connell from the Los Angeles Rams, a team that won the Super Bowl in February. O’Connell was the Rams offensive coordinator and paired with an analytics-based general manager, Kwesi Adofo-Mensah, the Vikings sought to “get with the times” in offense-first strategy and throwing the football.

Amid the last eight seasons, Minnesota unapologetically advertised a “run-first” approach with Mike Zimmer in charge. But that mentality will fall by the wayside with Ramsian coaching personnel in the house.

At quarterback, Kirk Cousins enters Year Five with the Vikings, hoping to lead a pass-happy purple offense for the first time since 2009. Cousins authored 33 touchdown passes to just seven interceptions — a dreamworthy statistical split — in 2022, but some Vikings faithful simply chalked up the numbers to “he didn’t do enough.”

The running back room will be some combination of Dalvin Cook, Alexander Mattison, Kene Nwangwu, and rookie Ty Chandler. Up and down Minnesota’s depth chart, no spot is deeper than RB. So, when O’Connell does prefer to run the ball, the Vikings are set up to succeed.

Wide receivers also aren’t a weakness, showcasing Justin Jefferson, Adam Thielen, K.J. Osborn, Ihmir Smith-Marsette, and other young pass-catchers. For the first time in over a decade, the Vikings march into September with more WR options than just “the big two.” With Zimmer, the preference was top-heaviness in some combination of Adam Thielen and Stefon Diggs or Thielen and Jefferson. But not anymore — the WR group is vast.

For tight ends, well, that hodgepodge is top-heavy. Folks have long predicted a “breakout” for Irv Smith — one that has not arrived through three seasons. In fairness to Smith, he was injured during the 2021 campaign, disqualifying the oft-mentioned breakout year. Johnny Mundt is on track to serve as TE2.

Finally, a familiar elephant marinates in the Vikings locker room — the offensive line. Minnesota never cracked the top half of the NFL per Pro Football Focus in OL pass protection with Zimmer in control, so perhaps 2022 is “the year” the trenches stabilize. Christian Darrisaw (LT), Ezra Cleveland (LG), Garrett Bradbury (C), Ed Ingram (RG), and Brian O’Neill are predicted to start. Although, Bradbury may be on a short leash.

Last year, the Vikings ranked 17th leaguewide per offensive efficiency. Ergo, the Football Outsiders projection would be a welcome change.