How the Vikings Handled the Commanders Key Players 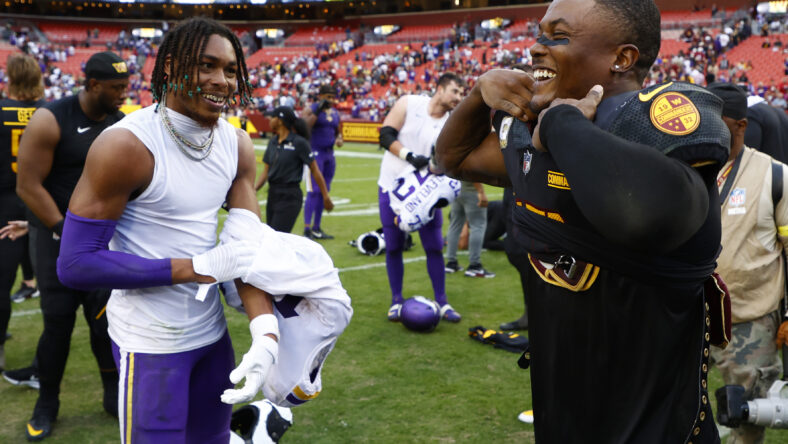 Last week, we identified five key players for the Washington Commanders that would be a significant factor in the Week 9 matchup with the Minnesota Vikings, thus having a significant bearing on the outcome of the game.

It was six straight wins for the Vikings as they came out as the victors at the end of a 20-17 scoreline. Here’s how the Vikings handled the Commanders key players.

Washington’s star wideout Terry McLaurin was kept to 5 catches for 56 yards. Holding a WR of McLaurin’s caliber to that statline is impressive. The Vikings lost starting cornerback Cameron Dantzler to an ankle injury, but deputizing for him, rookie cornerback Akayleb Evans made one of the plays of the game to deny McLaurin a completion on fourth down.

McLaurin didn’t have a bad game, but he couldn’t make a huge play. An 18-yard completion was the hallmark. His average of 11.2 yards per reception was his lowest of the season outside of the Week 4 game at Dallas. He was almost completely shut down, making two catches for 15 yards against the Cowboys.

How the Vikings run defense would cope without the injured Dalvin Tomlinson was a concern going into the game. There were a few occasions when the Commanders ran straight up the middle, and Tomlinson’s absence looked teling. However, the Vikings defense coped well with the two running backs — Washington had to turn to a tight end and a wide receiver for their two biggest run plays.

James Lynch and Khyiris Tonga filled in for the absent Tomlinson. Both did okay while holding down the fort, but the Vikings will hope Tomlinson is ready to return sooner rather than later.

It was a tough day for both teams’ offensive lines. This game saw two defensive fronts determined to dominate the game. Leno Jr. held up well with his pass blocking, scoring a 73.6 grade from Pro Football Focus. However, he wasn’t nearly as dominant as Christian Darrisaw was for the Vikings.

The Vikings pass rush is hitting its stride as we reach the halfway point in the regular season. The duo of Danielle Hunter and Za’Darius Smith will be as difficult of a prospect as Leno will face this season. He will be glad to see the back of the Vikings pass rush.

I billed the battle between Darrisaw and Montez Sweat as a clash of the titans, and neither player disappointed. PFF gave Sweat an overall grade of 83.0, while Darrisaw notched a 87.3. The two studs went head-to-head during the game, but the Commanders, unsurprisingly, moved Sweat around to provide him with more favorable matchups. Like the whole right-hand side of the offensive line, including the center, which is probably preferable to a head-to-head matchup with Darrisaw.

On Sunday, Sweat managed six pressures, three QB hits, and a pass deflection. It was a good day for the Washington defensive end, but not the great day he could produce. The Commanders were able to keep constant pressure on Vikings quarterback Kirk Cousins.

However, it wasn’t enough to get Washington the win. Cousins kept getting up and coming back, eventually leading his team to 13 unanswered points in the fourth quarter to seal the win.