How the Vikings Handled the Cardinals Key Players 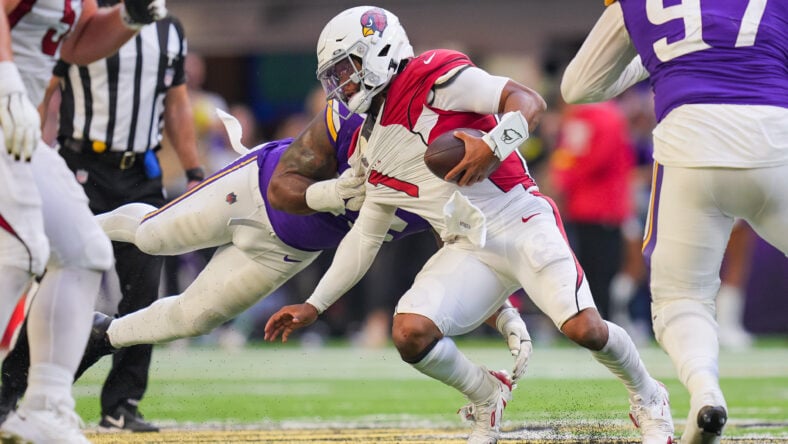 I identified four key players for the Arizona Cardinals that would be a significant factor in the Week 8 matchup with the Minnesota Vikings. It was five straight wins for the Vikings as they came out the victors at the end of a 34-26 scoreline. Here’s how the Vikings handled the Cardinals key players and came out on top.

Kyler Murray got a big chunk of passing yards, which isn’t a surprise against the Vikings “bend but don’t break” defense. That philosophy worked again for the Vikings despite Murray’s 326 passing yards and 3 touchdowns. The Vikings came out on top primarily due to a defensive display that included two interceptions and four sacks.

The Vikings defense managed to get pressure on the Cardinals quarterback all game. Murray scampered around and tried to make plays but ultimately couldn’t do enough. Za’Darius Smith was outstanding on the day, completing a hat trick of sacks, and played his part in the game-ending sack that Harrison Phillips eventually finished.

The return of DeAndre Hopkins makes the Cardinals a far more dangerous proposition. After returning from suspension last week with a 103-yard game, he went even bigger against the Vikings. He caught 12 of 13 targets for 159 yards and a touchdown. Hopkins is just good at football, and the Vikings couldn’t slow him down. The only target he didn’t bring in was due to a slightly surprising drop off a difficult chance.

Of course, the Vikings would have liked to slow Hopkins down more, but sometimes you must recognize that you came up against an elite player. However, despite some help from fellow wide receiver Rondale Moore who had seven receptions for 92 yards and a touchdown, the lack of a run game left the Cardinals offense lacking balance.

They managed only 78 yards on the ground, and 36 came from the quarterback — the Cardinals pair of running backs combined for just 30 rushing yards off of 14 carries.

Arizona safety Budda Baker led his team in tackles with 10 and had a pass deflection. I stated that the Cardinals defense couldn’t afford to allow Dalvin Cook to have a big day, and unfortunately for them, that’s precisely what happened.

The Vikings dominated on the ground with 173 yards from a combination of Cook, Alexander Mattison, and Kirk Cousins — all three of whom ran in a touchdown. Cook had a 30-yard run shortened by 15 after Garrett Bradbury got a flag for unsportsmanlike conduct for apparently calling Budda Baker soft.

Baker battled for his team, but when the Vikings offense can move the ball on the ground and through the air, they will be difficult to stop. As always this season, there were stutters from the Vikings in the shape of a missed field goal, an extra point from Greg Joseph, and a Cousins fumble. Overall, the Vikings offense was too much for the Cardinals to handle, scoring five touchdowns on the day.

The most memorable image of this game for Zach Allen is an unfortunate one for the Cardinals defensive tackle. It came on a Cousins rushing touchdown, where he cannot make any headway against Ezra Cleveland — allowing Garrett Bradbury to double-team with Ed Ingram on JJ Watt, giving Cousins the room to escape straight up the middle of the pocket. After he spots that, the Vikings quarterback takes off with his legs. He chases him to the sidelines. Allen proceeds to attempt a diving tackle that doesn’t even get close.

The veteran Watt had a dominant day on defense for the Cardinals, particularly against the rookie Ed Ingram. Overall, Watt had 2 sacks, 2 tackles for loss, and 3 QB hits. As for Allen, it was run defense where he struggled; PFF graded him a lowly 53.7 for this game. That is way down on his season grade of 71.2. It was one of the key areas of the game that led to a Vikings victory — disappointing for Allen but a massive pat on the back for the Vikings offensive line. 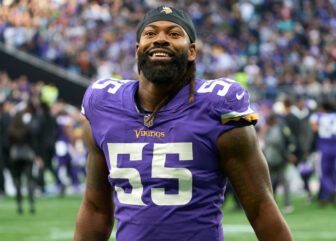 Also Read:
How Many Awards Does Za’Darius Smith Win?