Good Things Happen When the Vikings Win on Thanksgiving 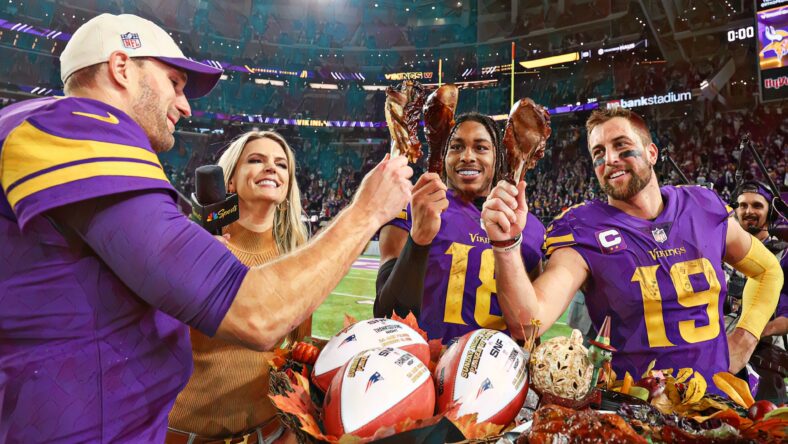 The Minnesota Vikings were triumphant on Thanksgiving night over Bill Belichick’s New England Patriots 33-26, a wonderful historical omen for the purple team.

On brand, Minnesota waited until the 4th Quarter to fully turned on the jets. But when it did, the Vikings emulated a prevailing pattern from 2022 — getting off to a hot start, slowing down in the 3rd and 4th Quarters, and then channeling Dennis Eckersley to close the thing out in the final period.

Kirk Cousins connected with Adam Thielen for a go-ahead 15-yard touchdown, leaving less than 10 minutes on the clock. Ed Donatell’s up-and-down defense took care of the rest, stifling the Patriots advances after surrendering 382 passing yards to Mac Jones on the evening.

And the broader lesson? Usually when the Vikings ascertain victory on Thanksgiving, good things [for the most part] occur thereafter. Minnesota is now 7-2 (.777) in Thanksgiving games, the third-best record in NFL history on the holiday of all teams that have played at least five such games. Only the Philadelphia Eagles and Los Angeles Rams have better Turkey Day records.

These are the Vikings end-of-season outcomes when winning on Thanksgiving:

Moreover, if the Vikings defeat the New York Jets next weekend, they’ll be undefeated against an AFC slate of opponents for the first time in a single season since 1998.

The Vikings now have a 7% of winning the Super Bowl, per FiveThirtyEight, the fifth-best odds leaguewide behind the Chiefs, Cowboys, Bills, and Eagles. The franchise has lost four straight Super Bowls and six consecutive NFC Championship games.

November finished for the Vikings as Cousins produced his best game of the season, the first time he’s tossed three passing touchdowns in a game since 2021, on a holiday, against Bill Belichick — in primetime.

Kene Nwangwu’s kick return touchdown was the first at U.S. Bank Stadium since November 20, 2016, and only the second in the brief history of the facility.

The Vikings are early 3.5-point favorites over the Jets in Week 13.