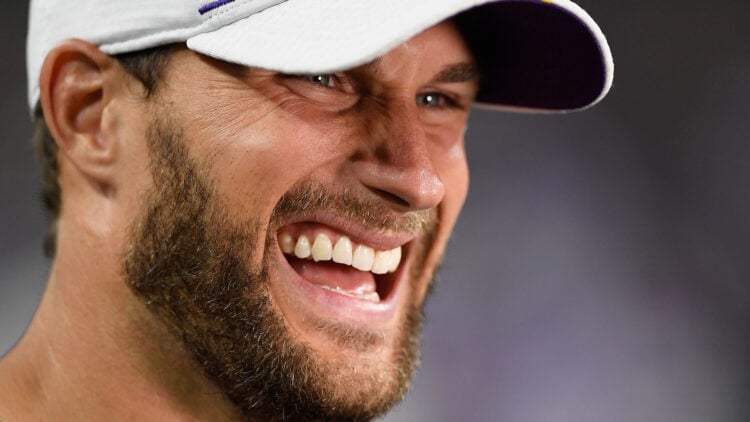 The Minnesota Vikings travel to London for a showdown with the New Orleans Saints on Sunday, and fans are evidently ready.

A giant mural illustrating Vikings quarterback Kirk Cousins popped up at an Eat & Bits this week, as Minnesota and New Orleans put London undefeated streaks on the line in Week 4. Both teams are 2-0 in London games.

Vikings fans have traveled well to London in the past, and the United Kingdom has a noteworthy Vikings following. And while the masses don’t universally celebrate Cousins as a household-name quarterback, he apparently has enough oomph in England to merit a mural.

Cousins has played in London one time before, too. He wasn’t with the Vikings, but he did toss a career-high 458 passing yards and two touchdowns en route to a 27-27 tie between the Washington Commanders and Cincinnati Bengals on October 30, 2016. Cousins connected with Jamison Crowder and Jordan Reed for scores that day, in the Commanders era when they featured men like Robert Kelley at running back.

The opposing quarterback for the Bengals, Andy Dalton, now plays for the Saints, albeit as a backup.

By his standards, Cousins has encountered a ho-hum start to 2022, ranking as the NFL’s 19th-best quarterback through three weeks, per most statistical metrics. But such is Cousins’ modus operandi. In an ordinary regular season, he takes about a month to acclimate to a new offensive coordinator — he’s worked with many — gets incredibly hot in October and November, and generally cools off a bit in Weeks 12-18.

The Eats & Bits adjacent to the mural is a coffee and snack shop — or what Americans would classify as a convenience store. And, of course, the Underground sign above Cousins’ head on the mural is London’s subway system.

The Vikings and Saints kick off at 8:30 am CST on Sunday. Minnesota becomes the first NFL team to play at all three NFL London venues — Twickenham, Wembley, and now Tottenham Hotspur.

Minnesota is favored by 2.5 points over New Orleans.