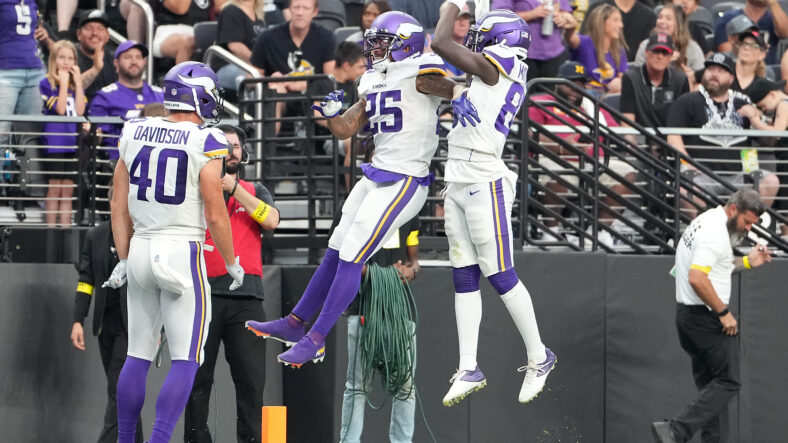 The Las Vegas Raiders are trying to remain relevant in 2022, frantically treading water with a 1-4 record through 5 games. Now, they’ve signed a former Minnesota Vikings WR.

He’s Albert Wilson, who was a member of the Vikings for about three months.

The Vikings onboarded Wilson at the end of May and kept him on the roster until roster shavedowns in August.

Wilson was a treat for Minnesota in the preseason, scoring two touchdowns against — you guessed it — the Raiders, Wilson’s new team, on August 14th in Nevada. But the two paydirts weren’t enough for Wilson to secure a 53-man roster spot, and the Vikings cut the veteran wideout loose eight days later. It was the same day that Minnesota traded with those same Raiders for QB2 Nick Mullens.

For now, Wilson bypassed Las Vegas’ practice squad and is a member of the active depth chart, joining these wide receivers:

Wilson is a career WR3-WR4 type, spending his first four seasons in Kansas City inside the Alex Smith era and the last three campaigns with various quarterbacks in Miami. In 89 career games, Wilson has grabbed 218 receptions for 2,499 yards and 12 touchdowns. Wilson has also returned kicks here and there.

At Georgia State, Wilson was a machine. He caught passes, returned kicks and punts, and totaled 6,235 yards, a Top 30 mark when he left the collegiate level. The Chiefs found Wilson in 2014 as an undrafted free agent. Wilson was at the peak of his power in 2017, the year before Patrick Mahomes formally took over, tallying 554 receiving yards on 62 targets.

But Wilson wasn’t in the cards for the 2022 Vikings, as Kevin O’Connell’s coaching staff retained rookie Jalen Nailor and traded with the Philadelphia Eagles for Jalen Reagor to fill out the WR squad behind Justin Jefferson, Adam Thielen, and K.J. Osborn.

After losing to the Kansas City Chiefs on Monday Night Football, Wilson’s teammate, Davante Adams, made headlines by shoving a photographer to the ground and is facing a possible suspension. Perhaps the move for Wilson is to fortify WR depth accordingly.