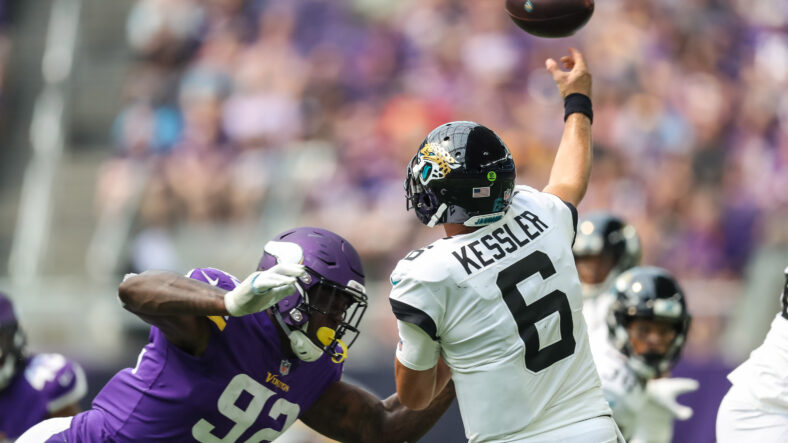 NFL coaches love “their guys” from past ties, and one is joining former Minnesota Vikings defensive coordinator Andre Patterson in New York.

He’s Jalyn Holmes, a defender who played for the Vikings in three seasons from 2018 to 2020.

Holmes, a defensive end, will audition for the Giants 53-man roster this summer after one season with the New Orleans Saints. Down in New Orleans, Holmes played in eight games, started one, and participated in 35% of all defensive snaps in 2021.

He wasn’t a priority for the Saints to re-sign this offseason under new head coach Dennis Allen, so the Ohio State alumnus will trek to the NFC East with the Giants.

With the Vikings, Holmes played in 25 games (nine as a starter), compiling 43 combined tackles, five quarterback hits, four tackles for loss, and a sack. His playing time in Minnesota spiked during the 2020 season when Danielle Hunter missed the whole season, and Everson Griffen departed for the Dallas Cowboys and Detroit Lions. Holmes was on the field for two-thirds of Vikings defensive snaps inside the pandemic season.

But in 2021, Minnesota welcomed back the aforementioned Griffen, signed Stephen Weatherly for a few games, drafted Patrick Jones II and Janarius Robinson, and opted to showcase D.J. Wonnum more in his sophomore campaign. Holmes, along with Ifeadi Odenigbo and Jordan Brailford, was the odd man out.

Holmes will reunite with Andre Patterson, the Vikings co-defensive coordinator for a couple of years under Mike Zimmer. Patterson was revered by Vikings enthusiasts, owning the distinction as one of the few coaches folks wanted to stick around when Zimmer was determined in January.

But Patterson bolted, preferring a defensive-line coaching role with the Giants, who are now led by Brian Daboll from the Bills. Patterson will now develop young pass rushers like Kayvon Thibodeaux and D.J. Davidson.

Holmes’ one career sack was against Sam Darnold, who played for a New York team at the time.