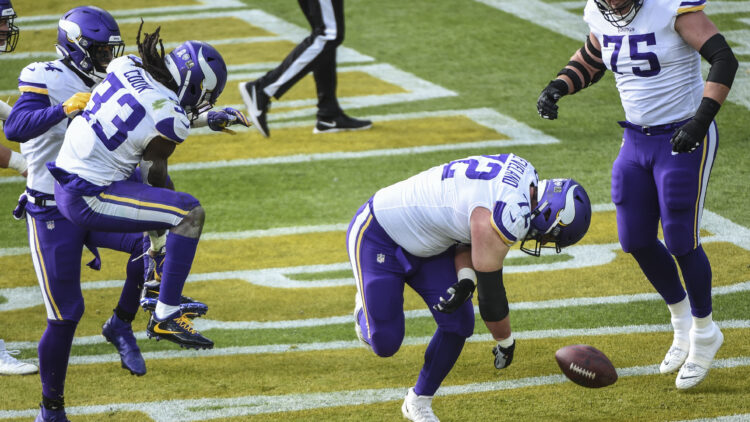 Minnesota Vikings left guard Ezra Cleveland and a right guard to be named at the end of the month are tasked with ending a weird drought for the franchise — over 10 years without a Pro Bowl trip for a Vikings guard.

That’s right. The last Minnesota OG to receive Pro Bowl recognition was Hall of Famer Steve Hutchinson in 2009 — 13 years ago.

Since Hutchinson’s retirement, the Vikings have conducted a relentless-but-futile quest to sew up the guard position, especially on the right side of the offensive line. From Joe Berger (who was actually quite good at times), Alex Boone, Dakota Dozier, Pat Elflein, Brandon Fusco, Mike Harris, Charlie Johnson, to Dru Samia — and about 15 others — guard play in Minnesota hasn’t been ideal.

Cleveland probably has the best chance to end the drought, showing promise as a bonafide starter in years one and two of his career. During his first season, Cleveland notched a 66.2 grade from Pro Football Focus, followed by an increase to 68.6 in 2021. Of course, those marks aren’t Canton-worthy, but this is the Vikings offensive line as the topic — fans will take it. With a new coaching staff led by offense-first thinker Kevin O’Connell, Cleveland could reasonably careen those scores into the 70s and nibble at Pro Bowl conversations.

The right guard spot in 2022 is a little dicier and not likely on the way to Pro Bowl anything. However, stranger things have happened. Last year, the team committed to OT Oli Udoh as the RG. He performed decently in the first few games, generally speaking, but succumbed to a penalty-happy season that canceled a sequel for the Vikings veteran in 2022. Udoh figures to return to his reservist-OT roots behind starters Brian O’Neill and Christian Darrisaw.

As for the eventual starting RG, a three-horse race is on the menu — a camp battle described as “fluid” by the aforementioned O’Connell. Based on June minicamp output, free-agent Jesse Davis is considered the August frontrunner to win the gig. But if he withers, Chris Reed, also a free-agent find, and rookie Ed Ingram are vying for the starting job.

While an RG king cannot be crowned until the regular plays out through a handful of games, Minnesota’s threeway solution of Davis-Reed-Ingram is cause for encouragement. Since 2018, the Vikings typically sign a Dakota Dozier or Dru Samia type and let it ride. Or, like Udoh, the team shifts a player to an unnatural position.

For the RG spot not to be solved in 2022, it would have meant that three separate human beings struggled for five months, and a new coaching staff mimicked the old one. And those happenings are severely unlikely.

At some point, the Pro Bowl drought must end. The Vikings have four dudes who could potentially end it this season.