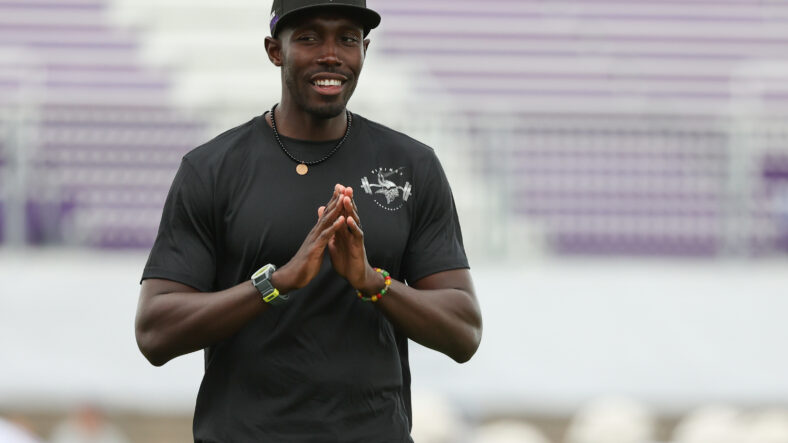 If you head to Over the Cap, you’d see that the Vikings only have $851,678 in cap space. That modest amount leaves the team with very little ability to make a deal; unless, of course, Kwesi Adofo-Mensah finds a way to create some financial wiggle room.

For whatever it’s worth, Field Yates of ESPN suggests that Minnesota might have a touch more cap room than previously believed. Take a look at the chart he sent out:

The Vikings find themselves in last place in the NFL when it comes to cap space. This is a team with an expensive QB1, lots of veteran talent, and then a pile of dead money. The end result is a snug budget.

Nevertheless, it is notable that Yates puts Minnesota at $1,352,712 in room, a decent amount above the OTC number. Spotrac – another leading salary cap website – has an even more optimistic view. They have Minnesota at $1,571,891 in room, nearly double the number listed on Over the Cap.

Forced to guess, I’d say the Yates number is probably closest to the truth, but the ideal is obviously for more financial flexbility.

Perhaps the most obvious implication of the Vikings having so little cap space is that the trade deadline may not bring any players to Minnesota. Indeed, to make a deal work, the Vikings would likely need to either shift money around or convince a team to retain a decent chunk of cash (or both).

Cap space rolls over from year to year. Having very little room in 2022 means very little will get carried over to 2023. As a result, next year’s budget won’t get the same boost that many other teams get.

For good reason, the majority of the fan focus rests on the current season. Minnesota has a chance to get to an impressive 6-1 in their upcoming home game against the Cardinals. If that occurs, then perhaps Adofo-Mensah will feel even more urgency to use nearly all the cap space available to him. Adding just one more impact player could help to keep Minnesota near the top of the NFC.