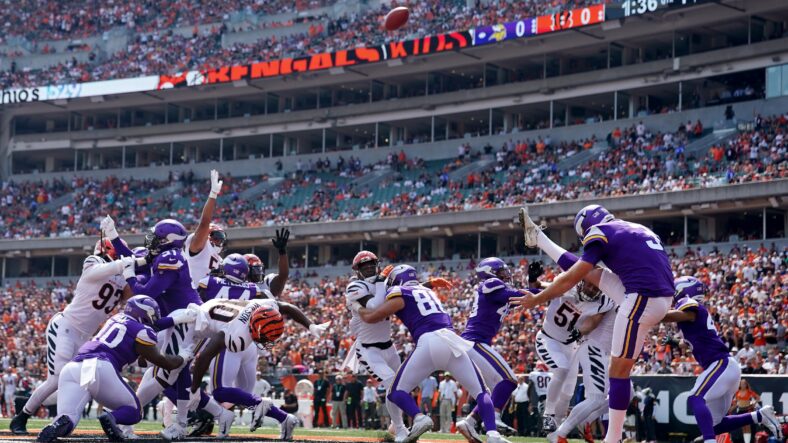 It’s quite tempting — perhaps even accurate — to assume rookie Ryan Wright won the punter battle, and that’s a wrap for the special teams decision-making. But don’t rule out a quick reunion with Jordan Berry.

The Vikings released Berry, an eight-year NFL veteran, on Thursday.

Releasing Berry set off a mini-storm of skepticism from Vikings fans as many believe the kicker, Greg Joseph, found success with Berry as the holder. And that may be true. Still, the Vikings appear confident that Wright is an adept holder and a better punter of the football than Berry.

Minnesota was supposed to have a self-imposed “punt off” this weekend at the Denver Broncos. But if there is any “punting off,” it will be Wright versus the ghost of Berry. The Vikings coaching staff is allowing Wright an audition with no in-game looking over the shoulder for the rookie. Fair enough.

However, there is absolutely no rule stipulating Berry cannot return — especially if Wright looks silly against the Broncos. In fact, this cut-Berry-keep-Wright idea could be cerebral coaching in live motion. Wright is slated to punt “by himself” on Saturday, creating confidence for the youngster and bolstering the reality of a regular-season simulation.

The Vikings know what Berry is — based on 2021 performance. Last year, Berry ranked as the NFL’s 16th-best punter per net average, gaining the Vikings 46.5 yards of field position on punts. He also boomed 26 kicks inside opponents’ 20-yard lines, the eighth-most in the NFL. Opting for Wright over Berry is the methodology of pursuing greatness rather than Berry’s “pretty good” production. Wright could be the next big thing, might play terribly, or find his way to the middle — like Berry in 2021.

But the misconception from Thursday’s roster cut is “done deal.” Berry does not have to be jettisoned from the Vikings forever. He could theoretically return on Sunday, especially if Wright flounders in Denver.

Of course, Minnesota must sweat the free-agent wire. Should Berry be signed by another team, then Wright is “the guy,” and this hypothetical plan is scrapped. The Buffalo Bills might be in the market for a new punter after the newfound legal trepidation for Matt Araiza.

Or — Wright may waltz into Empower Field at Mile High and utterly dominate to round out the Vikings preseason, leaving the Berry release in his wake. But don’t merely assume that Berry is gone forever just because he was released.

Hell, the Vikings re-signed cornerback Tye Smith on Thursday after cutting him nine days prior.