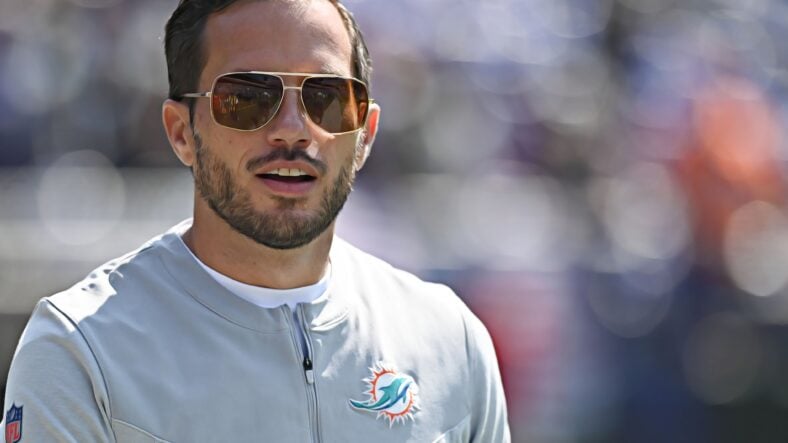 While the injury statuses of Miami Dolphins QBs Tua Tagovailoa and Teddy Bridgewater were up in the air this week, head coach Mike McDaniel has made a decision at QB1 for Week 6.

Pro Football Focus’ Ari Meriov tweeted on Wednesday, “Dolphins have ruled out QB Tua Tagovailoa for Sunday’s game vs. Minnesota. Teddy Bridgewater is progressing through the protocol but not ready to do any football-related stuff.”

And that nominates Thompson for his first career NFL start versus the Vikings after playing substantially in Week 5 following Bridgewater’s early-game injury. Against the New York Jets, Thompson hurled 19 completions on 33 pass attempts for 166 yards, no touchdowns, and an interception. The Dolphins lost without Tagovailoa and Bridgewater (for the most part), 40-17. Thompson was generally ineffective, but that’s how it goes for late-round rookie passers.

In Week 3, Tagovailoa was injured in a win over the Buffalo Bills as his head slammed into the ground, creating controversy lasting weeks. Tagovailoa was allowed to play four days later at the Cincinnati Bengals, and his head was again driven into the grass, resulting in more head trauma and a scary scene. Like the NFL should’ve recommended in the first place, Miami is proceeding gingerly with Tagovailoa.

To make matters worse for the Dolphins, Bridgewater’s head was also smashed into the grass last weekend. After apparently learning a gridiron lesson, Miami and the NFL are acting responsibly with Bridgewater, which perhaps wasn’t the case with Tagovailoa two weeks ago.

Thompson, the just-announced Week 6 starter, was a 7th-Round draft pick from Kansas State in April, and in relief of Bridgewater versus the Jets, Thompson looked like — you guessed it — a 7th-Rounder. He fired up a 29.2 QBR in Week 5 in an anemic showing against New York.

At Kansas State, Thompson recorded 42 touchdown passes to 16 picks in 45 games. Does that touchdown total seem low? It is — because Thompson also notched 26 rushing touchdowns. So, the Vikings are traveling to Florida for a road game against a backup quarterback whose mobility is a strong suit. Historically, at least in the last 20+ years, Minnesota has struggled against a) Backup quarterbacks and b) Mobile QBs.

Thankfully for the Vikings sake, Thompson isn’t some fancy QB prospect, but he does check the boxes of items that typically frustrate the Vikings.

Minnesota should feast on offense, though. The Dolphins passing defense ranks 32nd in the NFL through five weeks per DVOA. And the Vikings have oodles of aerial playmakers in Justin Jefferson, Adam Thielen, K.J. Osborn, Jalen Reagor, and Irv Smith.

The Vikings are favored by three points and haven’t won a game in Miami since 1976.