Christian McCaffrey on the Move after Gargantuan Trade 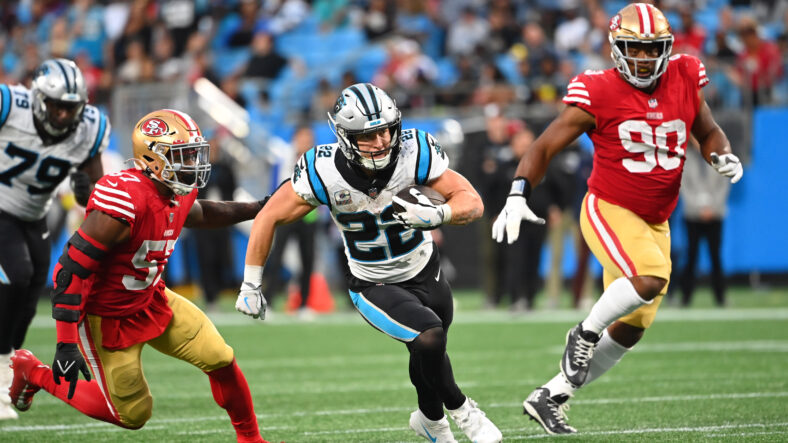 The Minnesota Vikings are 5-1 through six games, but the NFC’s balance of power swung wildly on Thursday night.

The San Francisco 49ers, who reached the Super Bowl in 2019 and NFC Championship in 2021, traded a bevy of draft picks to the Carolina Panthers for game-changing running back Christian McCaffrey.

The news hit as the Arizona Cardinals were finishing off the New Orleans Saints on Thursday Night Football, taking the NFL by storm for two reasons: a) The 49ers reestablished themselves as major players in the NFC’s playoff sprint. b) Why on earth would San Francisco donate a massive haul of draft picks for an oft-injured, aging halfback in “today’s NFL?”

No matter the answer to the latter question, a healthy McCaffrey in San Francisco spells problems for the Vikings, the NFC on the whole, and hell, the AFC, too. McCaffrey is a force and, when healthy, whisks an offense toward heights close to indefensible. Unfortunately for the Panthers, they could never align McCaffrey’s stardom with rest-of-team production.

Now, though, the 26-year-old playmaker can thrive in a 49ers offense that usually transforms “no-name running backs” into prominent personalities.

The 49ers are 3-3 through six weeks, situated in the NFC’s No. 4 seed as the ballclub somehow leads the NFC West courtesy of favorable tiebreakers. If the playoffs started tonight, the 49ers would host the New York Giants in the wildcard round — and probably win. After that, according to current standings, San Francisco would travel to Philadelphia or Minneapolis for a divisional road date with the Eagles or Vikings.

But here’s the sinful piece of the McCaffrey trade — the compensation. The Panthers received this Godfather package for the Stanford alumnus:

And trading that much for a running back during an NFL era trending toward pass-happiness by the very minute is downright sinister.

The 49ers will pair the NFL’s third-best defense per DVOA through Week 6 with an offense showcasing Deebo Samuel, Brandon Aiyuk, George Kittle, Jimmy Garoppolo (yes, him), and now McCaffrey. Those assets are spooky for an upcoming playoff run — if McCaffrey is healthy. The new 49er has missed 58.9% of football games since the start of 2020. Not ideal.

Still, San Francisco is evidently in it to win it, even without blossoming second-year quarterback Trey Lance who was lost for the season in September to injury.

The Vikings don’t play the 49ers or Panthers in 2022 during the regular season but could cross paths with San Francisco in mid or late January.

In 64 career games, McCaffrey has tallied 7,272 yards from scrimmage and 50 touchdowns.