Checking In on Vikings 12-5 Potential 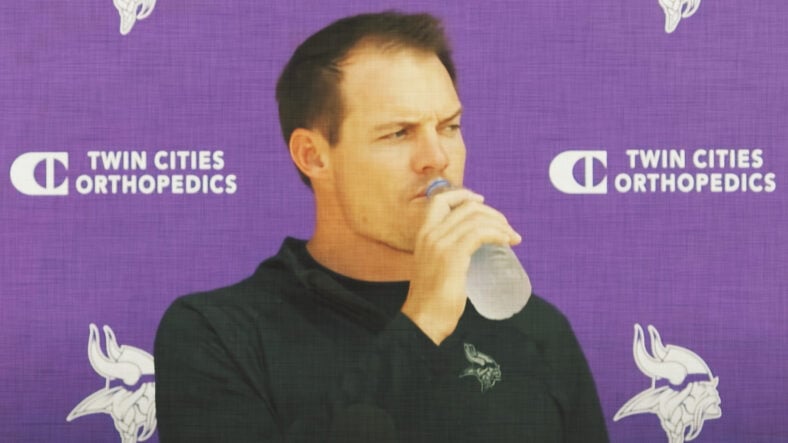 Back in August, I looked at the 2022 Minnesota Vikings regular season schedule and came up with a 12-5 record when the dust settled. Now just under halfway through the regular season, we’re staring down the possibility of that coming to fruition, but just how likely could it be?

Looking back at that prediction, which you can find here, maybe the most egregious thing I suggested was, “The Green Bay Packers are going to be good. No matter how weird or obnoxious Aaron Rodgers is, he’s one of the best ever to play the quarterback position. That wide receiver group is a mess, but he’ll find a way to make it work.”

That just isn’t close to the case. The receivers have been worse than imagined, Rodgers looks like a guy who enjoyed ‘shrooms this offseason, and Green Bay is simply not good.

Another less substantial misstep was saying, “Week 2 against Jalen Hurts could be a spot where Minnesota gets a quarterback before they get into a groove.” I had that game as a coin flip, but the Philadelphia Eagles remain the lone undefeated team in the NFL through their first seven games. Hurts looks like a stud, and that team is absolutely rolling.

There’s plenty of chatter out there about how Minnesota may be one of the worst 6-1 teams in recent memory. That’s probably hard to argue with, given a porous secondary and far too many games in which leads should’ve been expanded upon rather than ceded. Still, though, as was my primary belief coming into the season, the difference has been leadership and coaching. The six wins to Minnesota’s credit are real and can’t be taken away.

Needing six more wins with ten games to go, what does a re-evaluation look like?

One game gets added to this category in the form of the Indianapolis Colts. Matt Ryan has since been benched, and Jonathan Taylor is already nursing a nagging injury. Maybe Sam Ehlinger winds up being a starting NFL quarterback, but betting on that to happen in year one despite being a late-round pick seems like fool’s gold. The Vikings also play that contest at home, which should make a difference.

I can understand it’s odd to call a surprise 6-2 Giants team a certain win, but the homefield advantage also makes a difference. They are similar to the Vikings, and coaching matters for them too, but give me U.S. Bank Stadium making the difference in that one.

There’s an omission from the beginning of the year here, and it comes in a rivalry game with Green Bay. The Packers certainly won’t want to get swept by the Vikings, but it’s plausible that a bad team will be buried beyond caring by Week 17. Green Bay is not better than Minnesota, and while Lambeau poses challenges, especially if weather plays a factor, this is a game where a playoff team could come out on top.

To this point, Minnesota has gone 3-1 in games I called coin flips to start the year. The only remaining game from that group is against the Dallas Cowboys. They are good, but how good? Dak is not an elite-level quarterback, and Zeke Elliot looks to have been passed by his running mate Tony Pollard. Minnesota plays this game at home, and while they did get beat by Cooper Rush last time around, I’d assume this group wants revenge.

What was a 12-5 prediction back in August now has a path to something like 15-2. That’s lofty, but 13 or 14 wins shouldn’t be seen as impossible anymore.