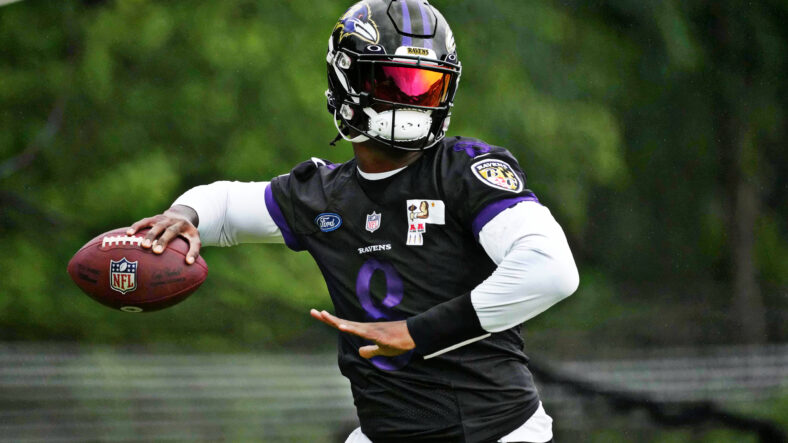 Drafted in the 1st Round of the 2018 NFL Draft, Baltimore Ravens quarterback Lamar Jackson is nearing completion of his rookie contract. And as talks between the Ravens and Jackson continue about an extension, CBS Sports radio host Zach Gelb wants to see Jackson end up with the Minnesota Vikings.

Jackon will earn $23.016 million in 2022, but as other franchise cornerstone quarterbacks like Kyler Murray secure gargantuan deals, the Ravens signal-caller should be the next man up.

On The Zach Gelb Show, the radio personality seemed to conjure the Jackson-to-Vikings deal out of nowhere. The Vikings aren’t in the market for a quarterback — they employ an expensive one at the moment — so perhaps Gelb’s plans are for the 2023 offseason.

Gelb said, “You know where I’d want to see Lamar Jackson go to? I want Lamar Jackson to be quarterbacking the Minnesota Vikings.”

“You just get to simply see Lamar with Justin Jefferson and Dalvin Cook,” Gelb added.

Minnesota extended Kirk Cousins by an extra season this March, gluing him to the depth chart through the end of the 2023 season. New general manager Kwesi Adofo-Mensah also inserted a no-trade clause into the contract — a caveat that wasn’t in Cousins’ previous deal. Ergo, if the Gelb fantasy were to come true, Cousins would have to sign off on a swap with Baltimore.

Jackson won the NFL MVP award in 2019, a supreme achievement for a second-year player. Since then, Jackson has attempted to rekindle the 2019 magic — with varying degrees of success. In 2021, the Baltimore passer was around the league’s 21st-best quarterback per an assortment of quarterback ranking metrics, but nobody cared because Jackson has the aforementioned MVP award on his resume. All in all, Jackson was only outstanding in one or two games last season.

Still, if Gelb is correct and a pathway somehow existed to attach Jackson with the Vikings depth chart, the output would be tantalizing. The allure of Jackson-Jefferson-Cook and others is indeed scrumptious.

It’s just unlikely to occur, though, as the Ravens will probably foot the long-term bill for the 25-year-old. Plus, Minnesota would have to trade Cousins and a plethora of draft picks for Jackson — and then turn around and hand $45 million per season. While Jackson may be worth it, the Vikings also must pay Jefferson before too long.

If the Cousins experiment flops — the 2022 season is an apropos trial with a new coaching staff — Adofo-Mensah is likely to tap a rookie quarterback on a four or five-year deal for the future. Otherwise, the Vikings would be forced to invest in Jefferson and a Jackson type — and not much else.