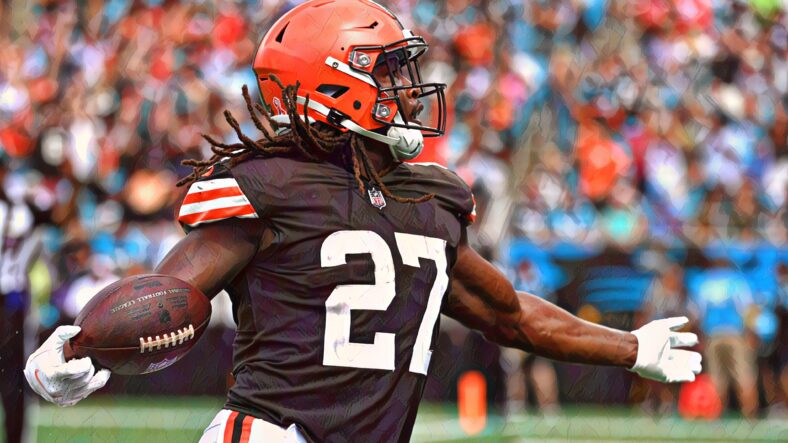 Because the Minnesota Vikings are 5-1, they’re a part of fancy trade theories that would otherwise not exist if the team was 3-3 or so.

In 2020 and 2021, the Vikings were 1-5 and 3-3, respectively, at this juncture, disqualifying Mike Zimmer’s old team from serious conversations about adding playmakers. But Kevin O’Connell’s Vikings may be a different story, particularly with a general manager in Kwesi Adofo-Mensah who enjoys trading players and draft picks like a kid does baseball cards.

And CBS Sports is fully on board with the idea of Minnesota getting richer, plopping the franchise into its ‘one move each contender can make’ article from Thursday. Bryan DeArdo from CBS Sports recommended the Vikings swing a deal for Kareem Hunt, a running back on the Cleveland Browns roster.

DeArdo wrote about Hunt to Minnesota, “Acquiring another running back, such as Cleveland’s Kareem Hunt, would bring versatility to the Vikings’ offense while helping keep Cook fresh for the stretch run.”

“Hunt is a former NFL rushing champion who spent the past three-plus seasons sharing a backfield with Nick Chubb. He’s been one of the NFL’s best receiving backs since coming into the league in 2017, racking up 190 receptions and 17 touchdowns over that span,” DeArdo continued.

In August, Hunt squawked to Browns management about his disgruntlement and requested a trade. Cleveland’s brass said no. Fast forward two months, and the Browns are 2-3 with a horrible defense and an embattled quarterback, Deshaun Watson, returning in seven weeks. It is unclear if Cleveland has conceded 2022 as a healthy-scratch year — it knew Watson wouldn’t play much — or if general manager Andrew Berry wants to retain all the weaponry.

Interestingly, if the Vikings had any interest at all in Hunt, Minnesota’s bossman Kwesi Adofo-Mensah last worked under Berry in Cleveland. The communications pipeline checks out.

Still, Adofo-Mensah doesn’t have oodles of draft picks to deal for Hunt — or anyone — as he’s already shipped 2023 picks from the 4th, 6th, and 7th Rounds elsewhere. Perhaps Hunt’s price would be a 5th-Rounder — it must be, according to DeArdo’s theory. Otherwise, the Vikings would have to dip in the 2024 draft class for trade capital.

In 65 career games, Hunt has tabulated 5,495 yards from scrimmage, 30 touchdowns, and 4.6 yards per carry with the Chiefs and Browns. He also carries a 2022 cap hit of $6.25 million, which the Vikings would have to find creative ways to accommodate.

While CBS Sports believes it would make sense, Hunt landing in Minnesota is a longshot. The Vikings already employ running backs galore — on a team that runs the ball the sixth-least leaguewide through six games.