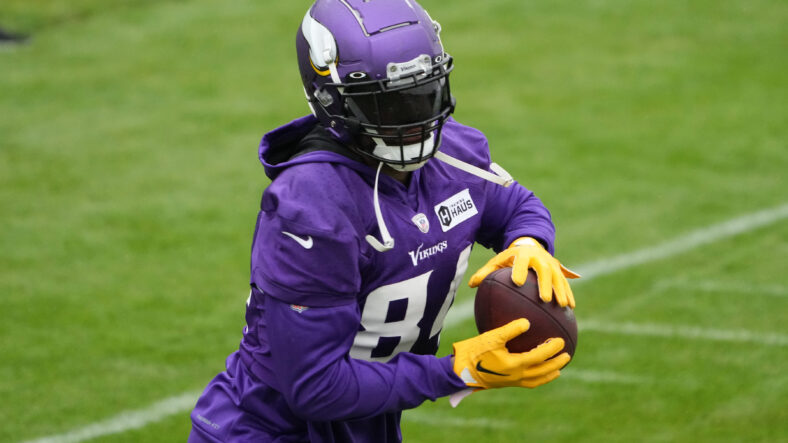 Not Johnny Mundt, Ed Ingram, nor Josh Metellus — unsung players who’ve actually stood out for the Minnesota Vikings — is the team’s “hidden gem” through three weeks.

According to Bleacher Report, the Vikings hidden gem is tight end Irv Smith.

Alex Kay of Bleacher Report nominated one player from each NFL team as a hidden gem so far in 2022. For the Vikings, it was Smith, and Kay wrote, “The 2019 second-round pick injects plenty of athleticism into Minnesota’s tight end room. He has massive potential to make contested grabs over smaller defenders and then racks up yards after the catch.”

He also noted, “At only 24 years old, there is plenty of potential for Smith to grow his game. He’s relying on his power and speed right now but could further improve by refining his route-running and mechanics.”

While Kay is correct about Smith in broad strokes — Smith has limitless potential, and folks have forecasted his breakout for four seasons — the boots-on-the-ground opinion of the young tight end is mixed. Smith has not been an infallible asset for the Vikings in 2022.

Smith ranks second in the NFL in drops through Week 3 — not a glorious distinction for any pass-catcher. That certainly doesn’t mean Smith is awful or that he should be benched, but two of his drops were deadly for Minnesota, especially on Monday Night Football in Week 2.

The pass could’ve changed the landscape of the Vikings otherwise hellish night, but no cigar. Still, Smith remains the Vikings TE1 and isn’t universally panned.

However, coining him an “unearthed gem” is a bit suspect, as Smith isn’t currently receiving the workload of a true-blue TE1. TE2 Johnny Mundt was Minnesota’s defacto TE1 in Week 1 against the Green Bay Packers, and since then, the Vikings have intermixed Mundt and TE3 Ben Ellefson — almost as much as Smith through three weeks.

Smith has tabulated 7 receptions for 68 yards and a touchdown. That equates to 385 receiving yards over the course of a 17-game season. Indeed, he has time to effectuate the “hidden gem” fate detailed by Bleacher Report.

But he has not done so yet — nor really anywhere close to it.