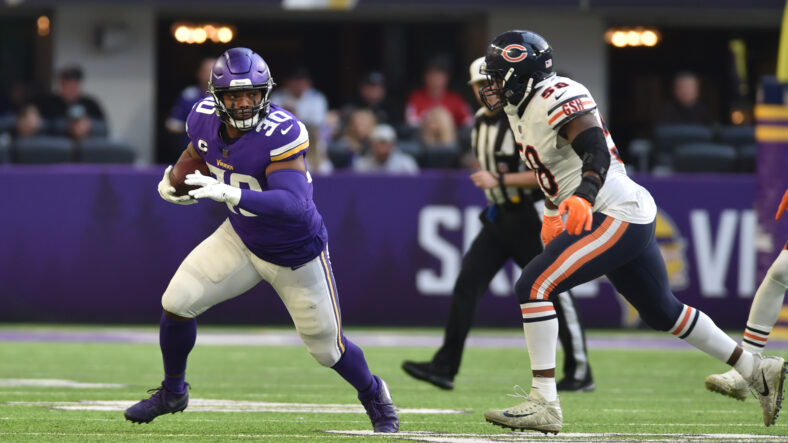 The Minnesota Vikings secondary foe, the Chicago Bears. lost a lot of talent in recent years. Not many pieces are left in the building from the dominant and feared defense of the past. The Bears are not expected to be competitive in 2022 and now are close to losing another star defender via trade.

Khalil Mack was traded to the Chargers, Akiem Hicks signed with Tom Brady’s Buccaneers, Leonard Floyd is a Ram and signed a big extension there, Eddie Goldman retired, safety Adrian Amos is playing for the rivals in Green Bay, and Kyle Fuller signed in Baltimore.

The linebacker came into the league in 2018 as the 8th overall pick and immediately was one of the best linebackers in the business. In four seasons, he played 61 games for the Bears and started 59 of them. His 524 combined tackles are the third-most in the league since 2018. His 348 solo tackles are the most of any player during that span. He also added 14 sacks and five interceptions.

The linebacker released a lengthy statement requesting a trade.

After his appreciation for Bears fans, he came to the most important part of the statement:

Unfortunately, the new front office regime doesn’t value me here. They’ve refused to negotiate in good faith, every step of this journey has been “take it or leave it.” The deal sent to me is one that would be bad for myself, and for the entire LB market if I signed it. I’ve been trying to get something done that’s fair since April, but their focus has been on trying to take advantage of me.

Obviously, no one knows what happened during the negotiations. However, the Bears have a ton of cap space and could’ve easily gotten a deal done with their star linebacker. While it was impossible decades ago, trade requests are common nowadays. Tyreek Hill wanted to go to the Dolphins, Davante Adams to the Raiders, and Deshaun Watson to the Browns.

Smith was a crucial part of the Bears’ defense, and after a trade, he’ll have a huge impact on his new team.

The Vikings will not be part of the Smith sweepstakes for multiple reasons. First, the Bears won’t trade a star player in their own division. However, the Vikings shouldn’t even be interested, as they have Eric Kendricks and Jordan Hicks at the position. He might improve the team, but the costs are likely way too high. The good news for the Vikings is that they don’t have to face Smith twice a year.

I wanted to be a Bear for my entire career, help this team bring a super bowl back to our city. However, they have left me no choice than to request a trade that allows me to play for an organization that truly values what I bring to the table…I haven’t had the chance to talk to the McCaskey family, and maybe they can salvage this, but as of right now I don’t see a path back to the organization I truly love.

The linebacker market exploded in recent years. Leonard from the Colts and Warner from the 49ers are getting over $19 million per season. Eric Kendricks, in comparison, is getting $10 million per season and can be considered a bargain.

Smith is currently playing out his fifth-year option of the rookie contract. He’ll be an unrestricted free agent next season unless his team signs him to an extension or uses the franchise tag.

Brad Spielberger has a different view about the situation:

Signing linebackers to big extensions seems risky. Barr, for example, signed an extension and regressed or wasn’t even in the field because of injuries. However, Smith is just 25 years old.

Per Ian Rapoport on Twitter, Smith was offended by the structure of the contract. “More frustrations: — The backloaded offer, which wouldn’t make him the highest paid in actual salary, included proposed de-escalators that not a single player out of the 94 non-QB, $15M+ contracts has. He was offended.”