An Emerging Rookie and Other Week 9 Vikings Takeaways 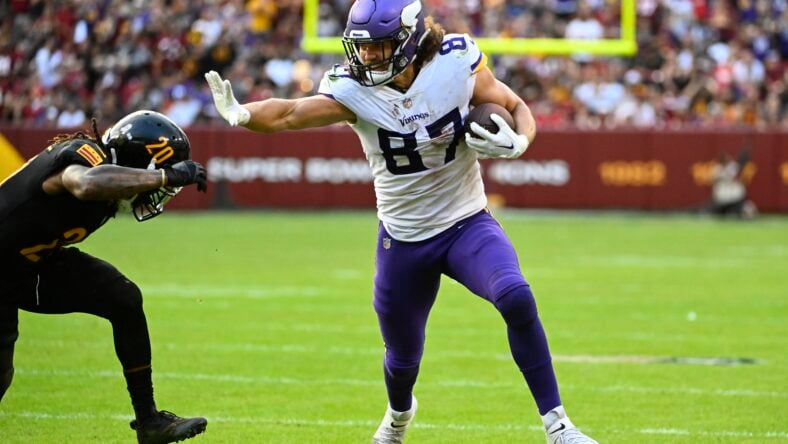 Like almost every week, the Vikings pulled off another comeback win. This time, the Commanders lost their 10-point lead in the fourth quarter. The Vikings are cruising to a division championship with a 4.5-game lead after all other NFC North teams once again lost. We learned a few things about the 2022 Minnesota Vikings.

Danielle Hunter missed all but seven games in the last two seasons, and folks wondered if he could regain his superpowers. A few games into the 2022 campaign, claims about a “washed” edge rusher were even louder, especially on social media. Some fans called for a trade because the star defender didn’t fit the new scheme.

The Commanders’ offensive line was no match for Hunter, and he racked up two sacks and seven tackles. Hunter wreaked havoc in the backfield all game long and forced Heinicke to scramble out of the pocket on multiple plays. PFF credited him with 7 pressures. The linebacker needed a few games to get comfortable in the new defense but is now back at his elite level.

The defensive line of the Commanders went up against a Vikings offensive line that struggled last week against the Cardinals. Daron Payne, Jonathan Allen, and Montez Sweat dominated the Vikings and almost won them the game. Kirk Cousins was under constant pressure, and Davlin Cook was almost neutralized in the running game.

On the other hand, the Vikings’ interior offensive line had a nightmare game. Ezra Cleveland, the third-year player, had an especially rough day. He played one of his worst career games and allowed an unbelievable nine pressures. The good news is that Brian O’Neill and Christian Darrisaw played a near-flawless game. While Ed Ingram didn’t look great, he played much better than in recent games. It will be interesting to monitor if it’s the beginning of a trend in the right direction or if it was just an outlier performance.

We’re nine games into the season, and the Vikings are clearly incapable of blowing other teams out. Every win in the six-game winning streak has been a one-possession win. The Vikings were the better team in the first half, and two fluky plays completely flipped the momentum in Washington’s direction. At first, the interception right before at the half that was intended for Justin Jefferson in the end zone, followed by an incredible play on the other side early in the second half.

Taylor Heinicke pulled the trigger on a deep pass into triple coverage. Camryn Bynum was in the perfect position to intercept the pass, but the referee ran into him, allowing a reception and the touchdown. The Vikings struggled to move the ball against Washinton’s defense, and they needed two touchdowns for the win in the fourth quarter instead of putting the game away when they had momentum.

Cameron Dantzler injured his ankle in the second quarter and had to be replaced. Rookie cornerback Akayleb Evans had his opportunity to shine in the bright lights. Not many expected the rookie to play a significant role in 2022. He was a fourth-rounder, and the Vikings already had Patrick Peterson, Cam Dantzler, and second-rounder Andrew Booth. However, Evans usurped Booth on the depth chart a while ago and therefore had to step in for Dantzler.

He has been a fan-favorite of most Vikings fans already, but now even convinced the remaining fans. Evans was the only cornerback to stop Terry McLaurin and even had a crucial fourth down stop in the fourth quarter. If Dantzler can’t go on Sunday in Buffalo, the Vikings would once again turn to Evans. One of his opponents would be former Vikings receiver Stefon Diggs.

Hockenson Is a Weapon

When the Vikings traded for a tight end, most thought it would be random backup from somewhere to slightly improve the tight end room. However, general manager Kwesi Adofo-Mensah went on a shopping tour and returned with a star player. T.J. Hockenson was just a few days in the building to learn the offense, and he immediately became one of the top targets.

The wideouts struggled to make plays, but Hockenson bailed out the offense with multiple catches on third downs. He finished the game with nine catches on nine targets for 70 yards. Once he’s learning more of the playbook, the sky is the limit for the tight end. He looked like the clear number two target in the passing game and will open up even more for other players. 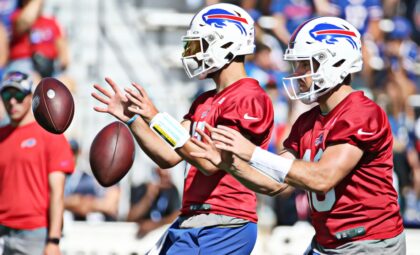