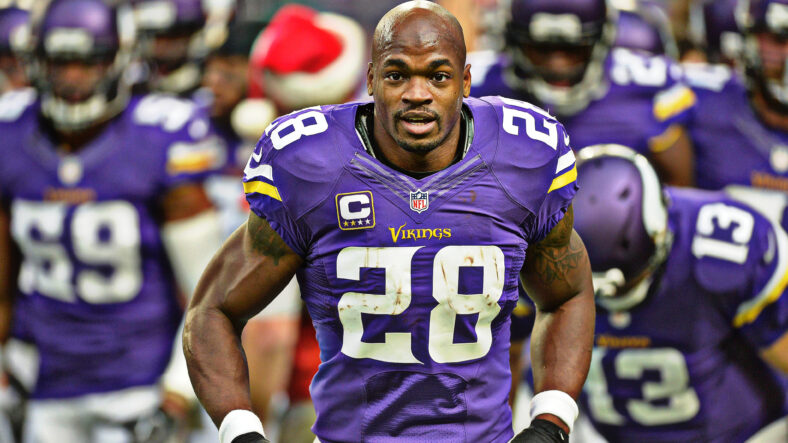 Former Minnesota Vikings running back Adrian Peterson won’t fight Le’Veon Bell this month after all, as the main event (not involving the NFLers) from Social Gloves 2 encountered a hiccup.

Peterson and Bell were slated for a mid-card bout, but the main event with YouTubers AnEsonGib and Austin McBroom caused the rescheduling. The promoter tweeted last week, “Due to the current unavailability of main event fighter AnEsonGib, the Social Gloves: No More Talk boxing event scheduled for Saturday, July 30 at Crypto.com Arena is being postponed to a later date. Organizers hope the McBroom vs. Gib matchup will still take place and are eyeing early September as the rescheduled date.”

The fight is now cast into doubt, in general, as the pairing of Peterson and Bell was a little strange out of the gate. Now, both must agree to a postponed time and remain committed to the idea of boxing.

Peterson and Bell are NFL free agents. Recently, Peterson declared his intentions to play in the NFL this season, whereas Bell affirmed a pivot to boxing full-time. Peterson, 37, played for the Tennessee Titans and Seattle Seahawks in 2021. And via Pro Football Focus‘ Ari Meirov, Bell said earlier this month about the fight, “This is not a one-off. This will be an introduction to everyone on what I’ve been doing.”

Since departing the Vikings after the 2016 campaign, Peterson has played for Saints, Cardinals, Commanders, Lions, Titans, and Seahawks — a journeyman indeed. Peterson has participated in five postseason games in his career, all with the Vikings.

Minnesota grabbed Peterson out of the 2007 NFL Draft, revitalizing the franchise for a decade. The team reached the NFC Championship with Brett Favre at quarterback in 2009 while Peterson ran wild in his third season. Peterson is the NFL’s fifth-leading rusher all-time and needs 352 yards to pass Hall of Famer Barry Sanders for fourth place. The ex-Viking is 3,437 yards away from the all-time rushing king, Emmitt Smith.

Bell, on the other hand, is still young enough to play in the NFL but has experienced reduced playing time since the start of the 2020 season. He had a career-low 44 touches in 2021 in stints with Baltimore and Tampa Bay. At his career zenith, Bell touched the football 406 times — an All-Pro and Pro Bowl 2017 campaign with the Steelers. He turned 30 in February.

Peterson was the underdog in the fight (+140), probably due to the age variance.

Both men have combined for 27,235 yards from scrimmage and 177 touchdowns in their NFL careers. Peterson told Minneapolis media in March he’d eventually like to retire with the Vikings.