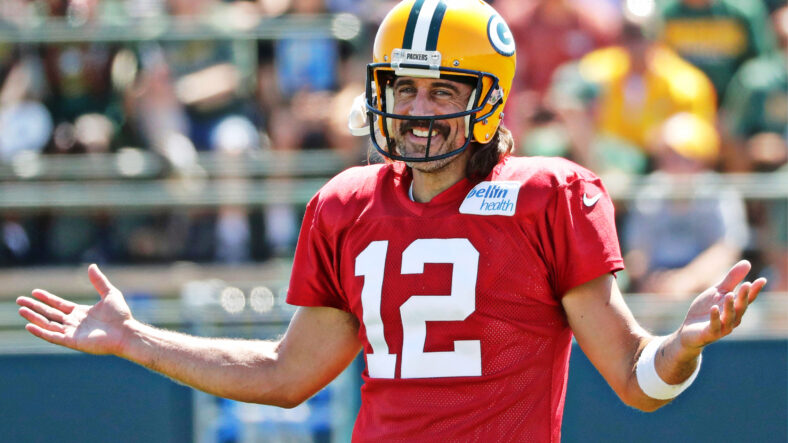 The most notable Minnesota Viking killer of them all doesn’t have Tom Brady’s plans for the future.

Brady turned 45 this week — yes, 45 — and will lead the Tampa Bay Buccaneers in a quest for Brady’s eighth Super Bowl ring in September. The Vikings and Buccaneers don’t play each other in the 2022 regular season — probably a good thing for Minnesota as teams led by Brady are 6-0 lifetime versus the Vikings.

The Vikings will, of course, face Rodgers this season. In fact, Minnesota and Green Bay showdown in Week 1 at U.S. Bank Stadium. And if Rodgers is telling the truth, it may be one of his final trips to Minneapolis.

Rodgers was asked by reporters this week if he plans to play until age 45 like his counterpart Brady, to which the Packers quarterback responded, “No, I don’t.”

Plain and simple — ain’t gonna happen, according to Rodgers. But he did add, “Happy birthday, Tom.”

Rodgers doesn’t own the spotless win-loss record against the Vikings like Brady — Mike Zimmer actually did a reasonable job putting the clamps on Green Bay, relatively speaking — but his career performance versus the purple division foe is merciless. Rodgers has produced a murderous 56-touchdown to 7-interception play in games against the Vikings, on the way to a Packers 16-10-1 (.611) record. Somehow, Zimmer found a close-to-even-steven record against the Packers while Rodgers still wreaked havoc individually.

The Packers signal-caller is the second-oldest starting QB entering the 2022 season and recently signed an extension in Green Bay after teasing a departure in the 2021 and 2022 offseasons, respectively. Unless things get wild, Rodgers will retire a Packer before age 45.

Rodgers will also be asked to win a fourth straight NFC North title without Davante Adams, the best-in-the-league wideout traded to Las Vegas Raiders five months ago. His hodgepodge of WRs, including Allen Lazard, Sammy Watkins, Romeo Doubs, and rookie Christian Watson, is one of the most “anonymous” groups of his career, even leaving Packers fans to wonder who’s the WR1? But the NFL body politic essentially just assumes “Rodgers will figure it out.”

Meanwhile, as Rodgers winds down his career, third-year passer Jordan Love remains in limbo. The Packers shockingly drafted Love in the 1st Round of the 2020 NFL Draft — and then simply haven’t used him because Rodgers is the QB1 despite his Favrian flirtations of leaving the franchise. Love has not looked impressive in brief stints as the starting quarterback, but not every passer is gangbusters out of the gate.

Soon, per Rodgers’ anti-Brady preference for retirement age, the Vikings will get a peek at Love or a quarterback to be named later in Green Bay.