4 Things the Vikings Can Learn from Rams vs. Bills 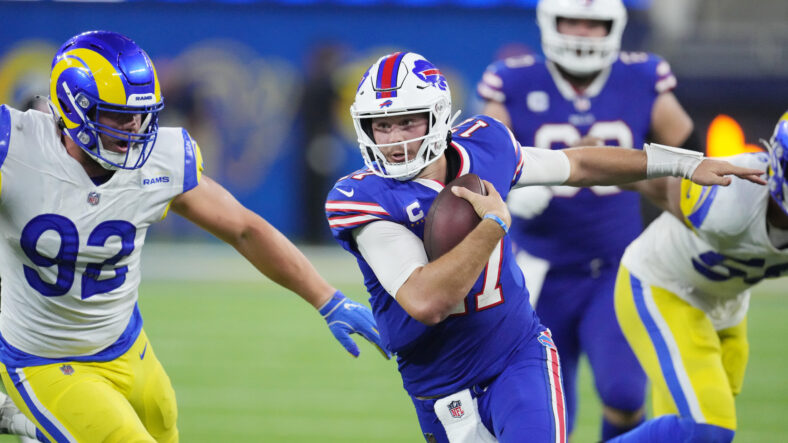 4 Things the Vikings Can Learn from Rams vs. Bills

The game was tied 10-10 at halftime. However, it felt that the Bills were the better team, and it was only a matter of time before Sean McDermott’s team took off.

The Vikings somewhat feel like a Rams 2.0 after hiring their offensive coordinator Kevin O’Connell. He is expected to try to take a lot of the playbook and culture to the Vikings. So there are some takeaways for the Vikings.

Turnovers Are Not the End of the World

While it has to be the goal of every team not to turn the ball over, the game is not lost if it does happen. Buffalo had four turnovers and managed to win the game. Josh Allen threw two interceptions, and running backs Moss and Cook fumbled. Granted, it helps if the defense comes away with three picks.

The Vikings, mainly Kirk Cousins, should copy the Bills aggressiveness. He did a fantastic job of limiting his number of interceptions to just seven last year but did so by also limiting the number of risky throws. No one is advocating for more turnovers and reckless play. It’s certainly possible that Cousins will have a better season even if he doubles his interception total.

Giving a receiver a chance, especially on third down, and throwing the ball deep even if the coverage is there, could be ways to make the offense more explosive.

Running Game Has to Be a Threat

The Rams didn’t threaten the Bills with their running game. Therefore, the Bills were able to keep both of their safeties high, and they could still stop the run. At the end of the game, the Rams had just 17 carries for 50 yards.

The Vikings have to play differently. Unlike the Rams, Minnesota has one of the most dynamic running backs in the game. Dalvin Cook went to the Pro Bowl in three consecutive years, and opponents are regularly scared to face him. Expect the Vikings to still run the ball a lot, even if the expectations are that O’Connell uses more passing plays.

If the purple team can run the ball efficiently, one safety will come up and try to limit the running game. By doing that, the Vikings can take advantage of a single-high safety, and Kirk Cousins can fully utilize his dynamic receivers.

The Bills used every tool in Allen’s repertoire. He threw 50-yard bombs on the run, he threw quick passes to the left and right after quickly diagnosing the defense, and he ran all over people. Granted, there’s nothing he can’t do. But they still used his full arsenal of tools.

The Rams, meanwhile, made a few mistakes. For example, the offensive line struggled to protect Stafford and McVay called a few plays without a quick checkdown option. Those resulted in sacks. He also drew up some beautiful passes where Cooper Kupp just had to find the soft spot in the zone coverage. That, on the other hand, is where Stafford excels.

Kirk Cousins, of course, can’t do some of the things Allen did. He won’t suddenly run for 56 yards, and he isn’t very good at playing out of structure. His strengths are accuracy, even on deep throws, executing plays, play action, and quickly diagnosing defenses.

In Week 10, the Vikings face the Bills in Buffalo. While every opponent is beatable, Vikings fans shouldn’t go into the game with high expectations. Buffalo has a great defense on every level, led by former Vikings head coach Leslie Frazier. Josh Allen is a favorite to win the MVP award, and he may be the closest thing to unstoppable the league has to offer. Minnesota has to win enough games in advance so they don’t have to go into the game in a must-win situation.