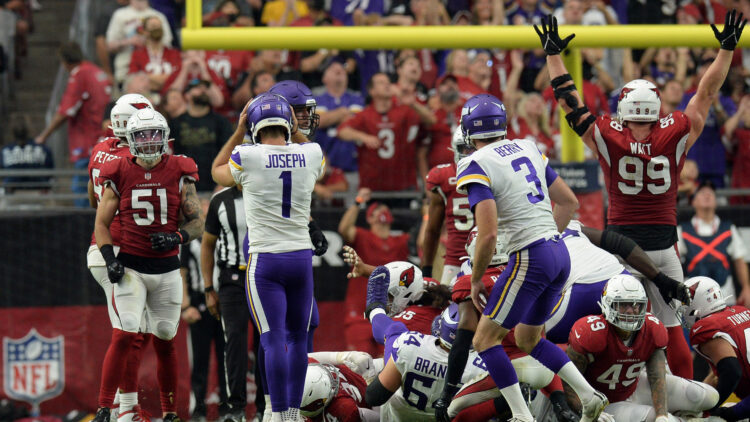 A season ago, the Minnesota Vikings took on the Arizona Cardinals in a Week 2 matchup at State Farm Stadium. Minnesota dropped that contest by a single point, their second straight close loss to open the year, and it spiraled from there. What can this team take from that game?

Plenty has changed from a season ago. Mike Zimmer is no longer on the sidelines as Minnesota’s head coach. A family tree isn’t orchestrating the offensive play calling, and some key positions have been turned over on the roster. There’s also plenty that remains the same. Kirk Cousins is still the quarterback, Justin Jefferson and Adam Thielen remain, and much of the same defense that gave up 34 points is back in purple.

Kevin O’Connell will have had two weeks to prepare for this matchup. Game film from the Cardinals this season was certainly on his to-do list, but you can bet breaking down the matchup from a season ago carries weight as well. As Minnesota looks to avoid a similar fate, what can it do better this time around?

Focus on the Passing Game

Minnesota kept Kyler Murray largely in check on the ground last year. He did score a touchdown but scrambled just five times for 31 yards. Where he torched the group was through the air. DeAndre Hopkins is back from suspension, and Robby Anderson was just acquired. Rondale Moore also put up a whopper of a game last season with a 77-yard touchdown reception.

Minnesota’s corners have been tested all year. It isn’t a great group, and the more Ed Donatell’s secondary can do to limit the big play, the better. Eno Benjamin and James Conner shouldn’t be expected to dictate the flow of this game, so the Vikings have to be locked into limiting opportunities for the passing game.

The Vikings opened this contest last year with K.J. Osborn hauling in a 64-yard touchdown within the game’s first minute. They gave that back on a Hopkins score before closing the first quarter with an Adam Thielen touchdown. Too much of this game was back-and-forth despite plenty of opportunity to pull away.

Minnesota forced Murray into two separate interceptions, one of which Nick Vigil returned for a touchdown. Danielle Hunter also sacked Murray three times. That level of dominance from the defense and a good day from the offense has to represent a wider gap than allowing an opponent to keep coming back. This is a game where a mediocre Cardinals team can ride a good offense into relevance. Minnesota can’t afford to let them do that.

This matchup last season saw the Vikings face 10 different third-down scenarios and convert just two of those opportunities. When looking to keep another offense off the field, there has to be a better effort on Minnesota’s side to extend drives. Time of possession was nearly even, but had the Vikings been able to control tempo just a bit more, that should’ve been enough to come away victorious.

O’Connell’s group has shown a bit more interest in offensive aggressiveness, but the offense must continue to move the sticks. Making sure this game doesn’t come down to a field goal again is a must, and Minnesota can’t have another missed kick.