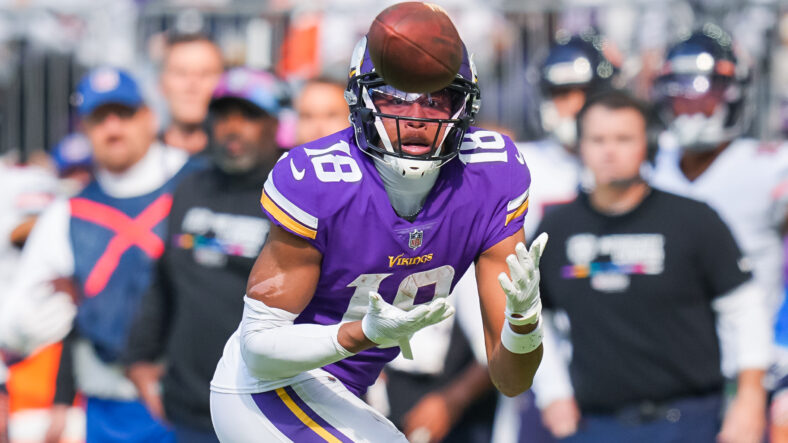 Each week, VikingsTerritory details 20 statistical or interesting facts about the upcoming Minnesota Vikings game. This week’s edition involves the New England Patriots, who are three-point underdogs facing the Vikings in Week 12.

These are the 20 random facts to know about Vikings-Patriots:

1. The Patriots defense ranks first in the NFL per defensive EPA/Play, outranking the Dallas Cowboys, who just annihilated the Vikings, by two spots.

2. When Thursday’s game kicks off, Harrison Smith will have played more games as a member of the Vikings than Chris Doleman.

5. The Vikings magic number for the NFC North is now four — by Thanksgiving. Any combination of four wins or four Detroit Lions losses (combined) hands the Vikings the NFC North for the first time since 2017.

7. The Vikings haven’t won a game against the Patriots in 22 years. They were 0-5 versus the Tom Brady-led Patriots but did beat Bill Belichick in 2000. Drew Bledsoe was New England’s quarterback then.

8. Justin Jefferson is on pace for 1,858 receiving yards and 9 total touchdowns.

9. Minnesota has a 99% chance of reaching the playoffs, per FiveThirtyEight. The Patriots are at 55%.

10. If the playoff started today, the Vikings would host the Seattle Seahawks at U.S. Bank Stadium in the wildcard round. And if Minnesota continues to win — and doesn’t collapse — it will likely face those Seahawks, Washington Commanders, New York Giants, or Atlanta Falcons to begin the postseason.

11. The Patriots are the NFL’s second-worst team in the redzone, only scoring touchdowns inside the opponent’s 20-yardline 43% of the time.

12. New England ranks 29th in giveaways, turning the ball over to opponents 1.7 times per game. That is also known as fourth-worst in the NFL.

14. Kirk Cousins was pressured on 63% of dropbacks against Dallas. For perspective, when Patrick Mahomes was under siege by the Tampa Bay Buccaneers in Super Bowl LV — and everyone was outraged — Tampa Bay pressured Mahomes on 38% of dropbacks.

15. According to Pro Football Focus, the Vikings best player at the moment is Christian Darrisaw, with an 89.0 grade. Darrisaw is on track for Pro Bowl and All-Pro recognition — if he returns to health relatively soon.

16. Five teams in NFL history have lost games by 30+ points in the regular season and gone on to win a Super Bowl.

17. The Vikings are the first team in NFL history to have eight wins thru 10 games with an upside-down point differential (-2). They’ve been outscored by opponents 229-231.