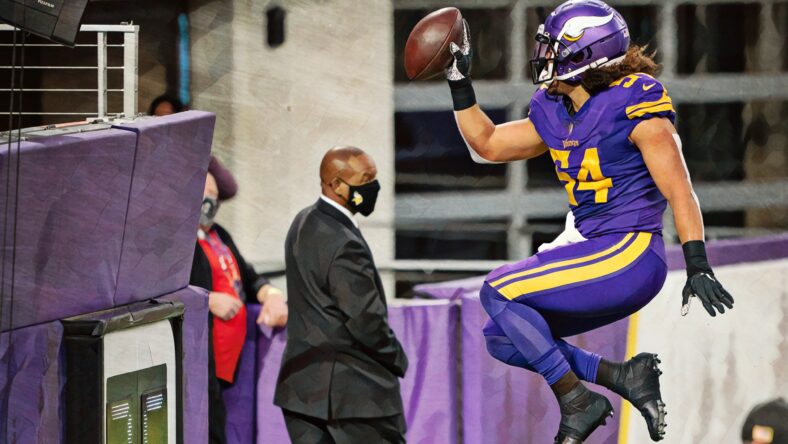 Each week, VikingsTerritory details 20 statistical or interesting facts about the upcoming Minnesota Vikings game. This week’s edition involves the Dallas Cowboys, who are 1.5-point favorites facing the Vikings in Week 11.

These are the 20 random facts to know about Vikings-Cowboys:

1. The Cowboys defense ranks first in the NFL in Sacks, averaging 3.9 per game. And Vikings left tackle Christian Darrisaw is questionable (as of Friday morning).

2. Dallas strangely struggles on 3rd Down, converting 37.1% of the time. That ranks 25th in the NFL.

4. Through nine games, the Vikings offensive line ranks ninth-best leaguewide per Pro Football Focus. Where have you been, oh mighty OL, all our lives?

5. The Vikings magic number for the NFC North is now three — with six days until Thanksgiving. Any combination of three wins or three Green Bay Packers losses (combined) hands the Vikings the NFC North for the first time since 2017. If one factors in the Detroit Lions, the magic number remains four.

7. The Vikings haven’t won a home game against the Cowboys since 2010. That game was Randy Moss’ first home game back with the Vikings during the brief 2010 reunion. Minnesota has lost to Dallas thrice in a row at U.S. Bank Stadium.

8. Justin Jefferson is on pace for 2,002 receiving yards and 9 total touchdowns.

9. Minnesota has a 99% chance of reaching the playoffs, per FiveThirtyEight. The Cowboys are at 93%.

10. T.J. Hockenson will play his first home game as a member of the Vikings versus the Cowboys on Sunday.

11. Minnesota doesn’t play another outdoor game until Week 17. The next six games are indoors.

12. The Vikings Week 10 win in Buffalo was the first time the franchise erased a 14+ point halftime deficit on the road to win a regular season game in 37 years.

13. Minnesota has scored at least one touchdown in 96 consecutive games (including playoffs). It is the eighth-longest streak in NFL history.

14. At 72.0%, the Vikings rank 31st leaguewide in defensive redzone touchdown percentage. If opponents tunnel into the redzone, they usually score against Minnesota.

15. According to Pro Football Focus, the Vikings best player at the moment is Christian Darrisaw, with an 89.8 grade. Darrisaw is on track for Pro Bowl and All-Pro recognition.

18. Thru 10 weeks, the Vikings defense ranks second in takeaways.

19. Kirk Cousins has thrown a touchdown pass in 39 consecutive games, the sixth-longest streak in NFL history.