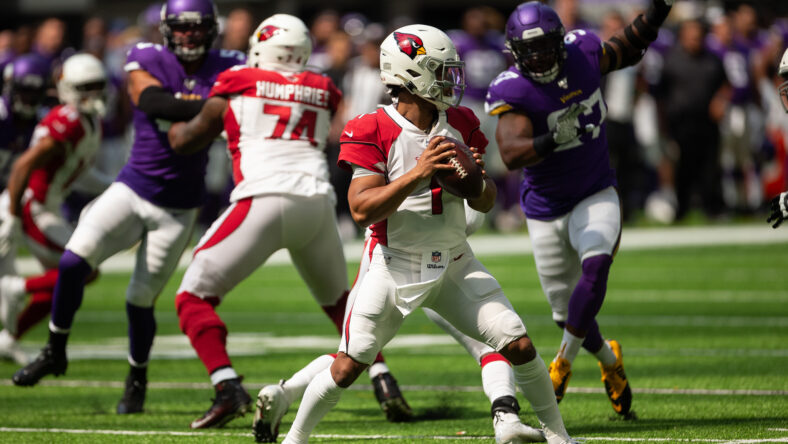 Each week, VikingsTerritory details 20 statistical or interesting facts about the upcoming Minnesota Vikings game. This week’s edition involves the Arizona Cardinals, who are 3.5-point underdogs facing the Vikings in Week 8.

These are the 20 random facts to know about Vikings-Cardinals:

1. The Cardinals surrender 25.1 points per game to opponents, the sixth-worst mark in the NFL through seven weeks.

2. Arizona takes care of the football efficiently, only turning it over 0.7 times per game. This ranks second-best in the league.

3. Through seven games, the Cardinals average 5.4 yards per pass, the lowest in the NFL. They rank 32nd in the metric. Without DeAndre Hopkins, who will play against the Vikings, Kyler Murray enjoys keeping things underneath in 2022.

5. The Vikings allowed the sixth-most yards to opponents through six games but surrender the 12th-fewest points. If you’d like a case study on bend-don’t-break, watch a Vikings game.

8. Justin Jefferson is on pace for 1,853 receiving yards and 9 touchdowns.

9. When Sunday’s game kicks off, Justin Jefferson will have played more games for the Vikings than Warren Moon.

10. The Vikings haven’t started 6-1 or better through seven games since 2009. In many ways, winning or losing against the Cardinals will determine whether fans believe the 2022 season is closer to 2009 — or 2016.

14. According to Pro Football Focus, the Vikings best player at the moment is Za’Darius Smith, with an 83.2 grade.

17. The Cardinals haven’t beaten the Vikings in Minneapolis since 1977 — 45 years ago and 10 straight losses in Minnesota.

18. These are the Vikings points differential rankings by quarter. Notice the 3rd Quarter remains problematic:

20. Minnesota is amid its first four-game win streak since 2019.