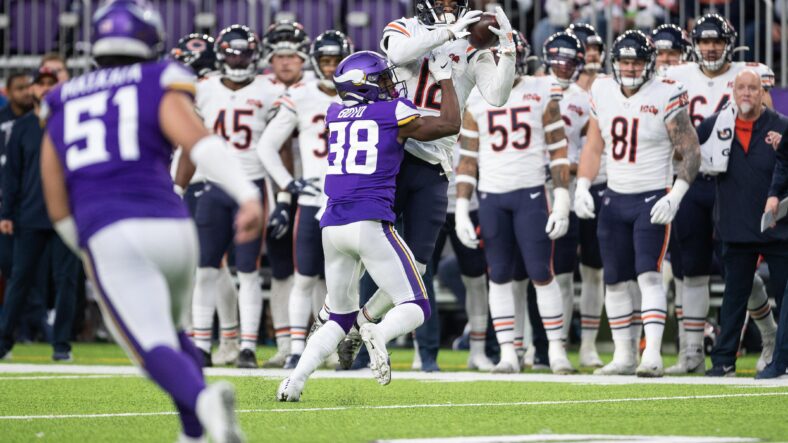 Each week, VikingsTerritory details 20 statistical or interesting facts about the upcoming Minnesota Vikings game. This week’s edition involves the Chicago Bears, who are 7.5-point underdogs facing the Vikings in Week 5.

These are the 20 random facts to know about Vikings-Bears:

1. Justin Fields has never started a football game at any level in the city of Minneapolis. Sunday will be his maiden voyage.

2. Chicago ranks 30th in points scored and 31st in yards gained. The offense is not explosive or anything close to it.

3. The Bears run the football more than any team in the NFL through Week 4. The Vikings rank 23rd in rushing yards allowed.

4. Sunday’s game marks the first time the Bears have played football in Minneapolis before the month of November since 2006. The teams tend to meet in the North Star State near the end of the season. But not this time.

5. Chicago, through four games, has one of the most anemic passing attacks of the last decade-plus:

6. The Vikings are 3-1 to start the season after playing who were considered three Top 5 defenses in the NFL when the season began.

7. Minnesota’s next five games are at noon CST.

8. Justin Jefferson is on pace for 1,670 receiving yards.

9. When Sunday’s game kicks off, Adam Thielen will have played the same amount of games for the Vikings as Adrian Peterson (123).

10. Kevin O’Connell is the first Vikings head coach to start 3-1 (or better) through four games of his first season since Dennis Green in 1992.

11. At 95 yards worth through four games, the Vikings are NFL’s least-penalized team. The 95 yards are also the lowest in franchise history through the first four games of a season — the least in 62 years.

12. The Vikings haven’t been called for offensive holding, defensive pass interference, facemask, unnecessary roughness, or roughing the passer yet in 2022.

14. According to Stathead, Danielle Hunter has 4 QB Pressures through four games of 2022, which ranks 89th in the NFL.

15. Minnesota pass-catchers have 8 dropped passes in 2022, the fourth-most in the NFL through October 5th.

19. Compared to previous seasons, the Vikings pass rush just isn’t there yet:

20. The Vikings have started 4-1 in eight seasons throughout franchise history. They reached the postseason in all eight years. Of course, they started 6-0 in 2003 and collapsed. And 2016’s 5-0 start was also squandered. But 4-1 is a good omen historically. We shall see if they win Sunday.