Wake me up when the season starts. After two weeks of second and third-stringers, it is time to either get the starters in the game to knock off the rust or go watch the Twins. The Vikings’ offense was underwhelming against the San Francisco 49ers on Saturday at U.S. Bank Stadium. After a week of hearing about fireworks and some great plays (and fiery words from one Kirk Cousins) at the joint practices, we didn’t get to see the starters and the Vikings lost 17-7.

Talk about a buzzkill.

Until Monday morning when there was interest a new! The Vikings traded a conditional seventh-round pick in 2024 for Las Vegas backup QB Nick Mullens. And just in the nick of time since on Saturday, we watched some regression from second-year quarterback Kellen Mond, who had some flashes but then threw two bad picks. Sean Mannion was more of the same, some moments bracketed by less than stellar play. (Although a nice throw up the seam to Zach Davidson, who dropped it on his way to a huge gain, could have changed our impression of Mannion.)

Suddenly, the preseason has a heck of a lot more meaning. (Can the Vikings get a fourth preseason game to get Mullens acclimated? Wait, never mind.)

The defense played well and several of them distinguished themselves: Ty McGill (1.5 more sacks); LB Brian Asamoah shined again and looks like the real deal; and Ty Chandler ran his way into our hearts once again with a decent performance. And Mark Craig from the Star Tribune will be on hand at the Vikings Territory Breakdown podcast to discuss all of the above with co-host Joe Oberle, senior writer from VikingsTerritory and PurplePTSD. They certainty spice up the doldrums of more preseason football to come. 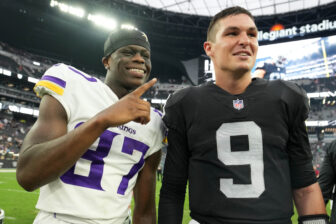 Also Read:
Get to Know the Vikings New QB