You Should Want the Vikings Rival to Draft a QB 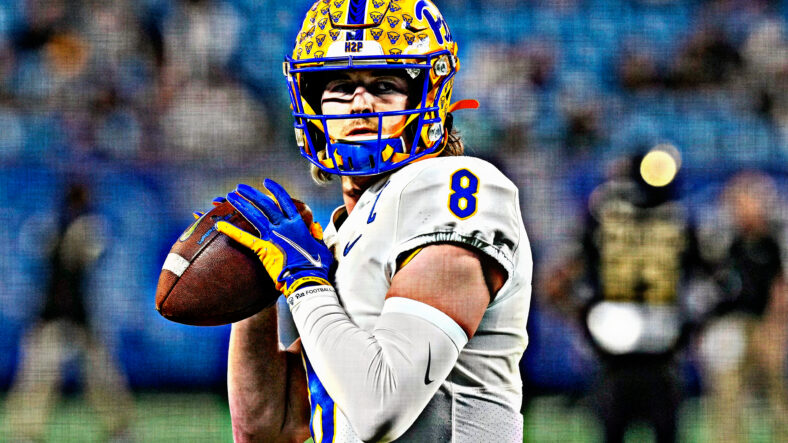 The Detroit Lions, a less-intense rival of the Minnesota Vikings, are talking to 1st-Round quarterback prospects, which is delightful news for Vikings fans.

Of course, Vikings enthusiasts have no vested interest in Detroit becoming stronger, but a selection by Detroit of Kenny Pickett or Malik Willis equates to Vikings prosperity.

Because of the draft process of elimination.

The Vikings have the 12th overall pick in this month’s draft. Anytime a team “reaches” for a quarterback prospect, the Vikings draft candidacy pool ripples in a glorious way. For Minnesota to end up with a coveted player like Kyle Hamilton, Derek Stingley Jr., or even Kayvon Thibodeaux, other franchises must do wonky stuff — like drafting a quarterback too early.

On the whole, it’s not silly for a lowly top-of-the-draft-order team to choose a quarterback. It’s wise, in fact. But this draft, in particular, is not renowned for quarterback supremacy. Draft pundits forecast this group of QBs as underwhelming compared to previous drafts.

So when the Lions — they have the 2nd overall pick — are linked to a player who would be drafted in the 2nd or 3rd Round of any other draft, non-quarterbacks fall down the board, an advantageous dream for the Vikings.

Draft brains could be wrong, and the Lions could absolutely nail it — once and for all — at quarterback with the selection of Pickett or Willis. But the idea leaves a lot to chance, especially for an organization that just squandered 12 seasons of Matthew Stafford. Detroit traded Stafford westerly to the Los Angeles Rams in 2021, and all he did in Year 1 out there was win a Super Bowl.

Too, this “team reaching for players” notion isn’t exclusive to Detroit. No matter the franchise ahead of the Vikings, whichever teams make silly picks or force quarterbacks to own Top 10 draft hype, pays dividends for Minnesota.

It’s basically the only way, outside of a trade-up by Kwesi Adofo-Mensah, for the Vikings to net a Hamilton, Stingley, or Thibodeau — other organizations drafting for team need.