The Vikings Should Draft One of These Players 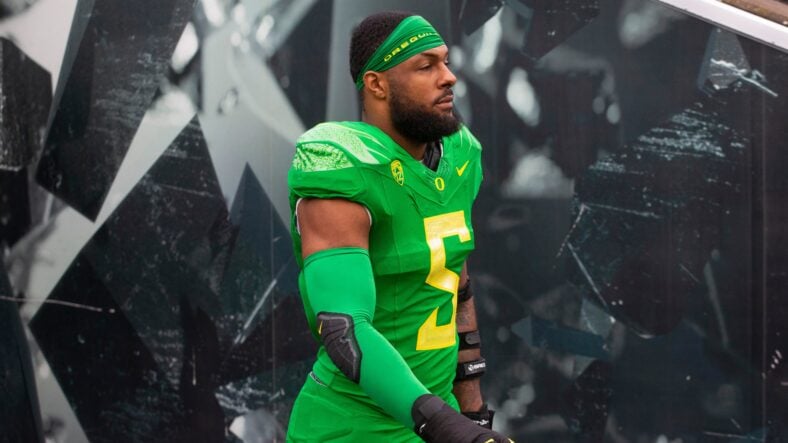 Oregon’s Kayvon Thibodeaux enters the stadium for the game against Oregon State on Nov. 27, 2021. Syndication The Register Guard

Kwesi Adofo-Mensah will be in the spotlight when the commissioner opens the draft as he’s the final decision maker on draft day for the first time in his career. His first selection will forever be connected to him. He should draft one of these players.

Trent McDuffie was an absolute superstar for the Washington Huskies. The California native earned PFF grades above 80 in all three of his college seasons, while he didn’t allow a touchdown in his final two seasons on campus.

The Washington cornerback is one of the safest picks in this year’s draft. He showed what he could do in college, and there’s not much projection necessary. His biggest strengths are his movement skills. He possesses blazing speed, and his agility is off the charts and will be elite even at the next level. McDuffie is special in man and zone coverage and can play inside and outside. Therefore he is the most versatile cornerback in the draft.

Some fans and pundits are concerned about his size. He is just 5’11” and has short arms. His pro comparison is Packers star defensive back Jaire Alexander, who has similar measurements and is doing fine, as he is one of the best cornerbacks in the NFL.

The Alabama wideout has elite game-breaking speed. He can open up the field for Justin Jefferson, Adam Thielen, and Dalvin Cook, which could transform this offense into something special. Opponents can’t double team all of the weapons.

In his one season at Alabama, Williams recorded 1,572 yards. The only Alabama receivers that had more yards in a single season were NFL players Devonta Smith and Amari Cooper. In the national championship game, Williams tore his ACL. He received a magically short recovery timeline and is already ahead of it. He may be ready to play in week 1.

The Greek is one of the most powerful defenders you’ll ever see. He can move the biggest offensive tackles backward with ease. His bull rush is special. His versatility would be a perfect fit for the Vikings’ defense. He can play inside as 3-4 defensive tackles and outside as a linebacker to be a true pass rusher. He has an incredibly high motor and never takes plays off.

In his senior year, he had a phenomenal season. Ten tackles for loss and four and a half sacks resulted in a PFF grade of 87.2. His pass-rushing grade was even higher – 90.6. Some people point out his sack number as a negative but forget that he frequently faced double teams and still found ways to impact the play.

The Ohio State receiver has shades of Justin Jefferson. He is fast and quick, and his double moves appear in nightmares of cornerbacks. Wilson is extremely hard to tackle and is versatile like Jefferson. He played a full college season in the slot before returning to the outside in 2021. His marvelous route running paired with 90-percentile speed is a problem for defenses. After a catch, he can make defenders miss with ease. Whatever Kevin O’Connell wants him to do at the next level, he can do it and certainly has done it in the past.

Two things have to happen if Kwesi Adofo-Mensah wants to get the Oregon star. He has to fall in the draft. Per various reports, that is exactly what will happen, and the Vikings have to be confident in their ability to coach young pass rushers up.

His get-off after the snap is outstanding, and he is a true game-changer with his speed rush. The problem is that it’s all he has. The pass rush moves are a work in progress, and he never wins with power. In the running game, he has to learn a lot, and his motor didn’t appear to be at the highest level at all times. He has the potential to become one of the best pass rushers in the league, but the concerns scream ‘bust potential.’ He is a high-risk, high-reward player.

Booth almost exclusively played in zone coverage in Clemson. He is, tied with McDuffie, the best player in zone coverage in the draft. His instincts are special, and he sees plays before they happen. Booth is the most aggressive tackler among these five prospects. Teams will appreciate the effort, but he must work on his technique, missing too many tackles.

Andrew Booth Jr. missed the combine due to a hamstring injury and did not participate in the Clemson pro day because he is set to undergo surgery on a core muscle. As a result of his injuries, he is sliding down draft boards and, therefore, could be a steal if the Vikings trade back and have their first selection in the 20s.

Wyatt is the forgotten Georgia Bulldog. In the pre-draft process, the spotlight was on Jordan Davis and Travon Walker, while Wyatt had an all-time great performance at the combine as well, in addition to a great year for the national champion in 2021. He is excellent against the run and as a pass rusher.

Wyatt is a scheme fit as he’s perfect for playing the 3-4 DE role. His first step is unbelievable, and he is too fast for most guards. One of the most explosive interior linemen in the NFL. He is a well-rounded player who would be a huge upgrade from the start.

Derek Stingley Jr. and Ahmad ‘Sauce’ Gardner are the two best cornerbacks in the draft. For that reason, they are highly coveted and probably not available at pick 12 unless they fall in the draft. Alternatively, the Vikings could trade up for them.

Stingley had a marvelous 2019 freshman season as Justin Jefferson’s teammate before injuries cost him significant parts of the next two seasons. If he can play at the 2019 level, he will be one of the top cornerbacks in the NFL. His speed and agility if off the charts. There is some risk involved with picking him but high potential as well.

Gardner’s coverage is unmatched in the class. He allows close to no separation and, therefore, never allowed a touchdown in coverage in his college career. The Cincinnati cornerback is a true unicorn, as he’s a long 6’3″ cornerback with a massive wingspan. He would be the prototypical press-man cornerback for Ed Donatell’s scheme.

Kwesi Adofo-Mensah is sitting in a great position in his first draft. He can trade up and down, while he can just pick an elite player at position 12. Someone will fall, as just 11 players are picked before his selection.