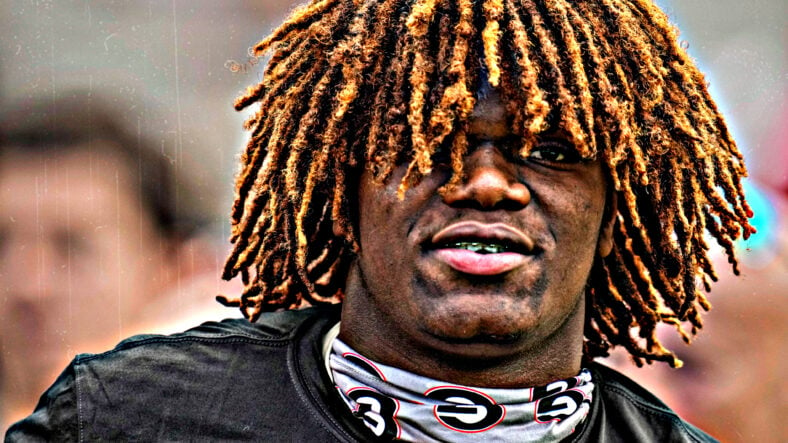 First, the Minnesota Vikings made splashy and controversial headlines by trading the 12th and 46th overall picks to the Detroit Lions on draft night in exchange for the 32nd, 34th, and 77th picks.

Then, they drafted Lewis Cine, a safety from the University of Georgia.

On the whole, Vikings faithful enjoyed the selection of Cine while bemoaning the trade haul. Minnesota could’ve acquired more from Detroit, at least according to previous likeminded trades. Alas, they did not.

Cine (pronounced seen) is a versatile and violent football player, tapped by Minnesota to start immediately and eventually take over for Harrison Smith. He’s a machine that hits hard and runs like lightning (4.37 speed).

And, not for nothing, Simms is the same pundit who forecasts quarterbacks in the draft with astounding accuracy. He’s rarely wrong in the pre-draft space.

The Vikings had an unmistakable path to draft Kyle Hamilton, considered the best safety in the draft and a Top 3 prospect overall. But Kwesi Adofo-Mensah decided otherwise, trading down with Detroit, stockpiling Day Two draft picks, and choosing a different safety.

Whether it was Hamilton or Cine, safety was a positional need for the Vikings. During free agency, the safety spot was the one position on the defensive depth chart in which Minnesota did nothing. That led onlookers to believe second-year defense Camryn Bynum was the heir apparent for Xavier Woods, last year’s starter, but Cine changed the forecast.

In theory, Cine should start in September unless Bynum somehow supplants him on the depth chart. Moreover, the safety position is not classified as a “premium” spot by modern NFL standards, so the Vikings choosing one in the 1st-Round raised eyebrows.

Regardless, when credible NFL analysts define rookies as man crushes, the drafting team is doing something right.

So did Jordan Reid from ESPN.

The Vikings are scheduled to make three additional picks on Friday night.