The Vikings Cost of Trading Up in the Draft 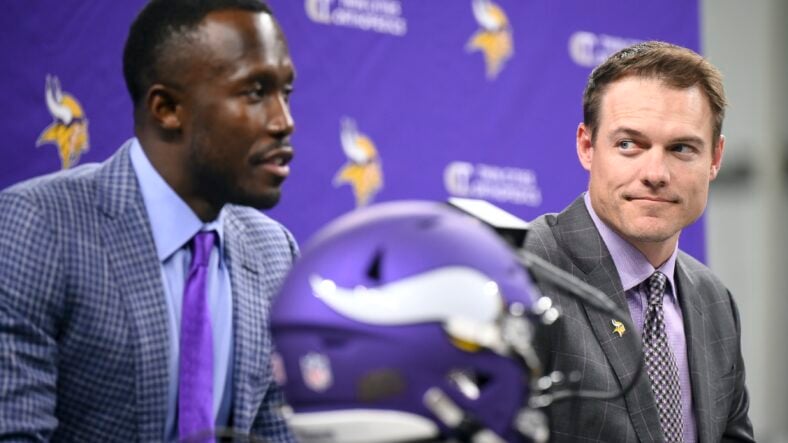 In recent years, the Minnesota Vikings became famous for trading down in the draft to secure as many picks as possible. It seems like the fans of the franchise would like to forget about that specific strategy of the Spielman era, even if it helped to bring in some solid players over the years.

Now, a fresh face makes the final decisions on draft day: Kwesi Adofo-Mensah. He is often associated with analytics, and the analytics probably advise him to trade down in the draft. It will be the first draft in the new GM´s career. He has no track record so far, and therefore it´s a total mystery what he´s going to do.

One way to go could be to start by doing the complete opposite of his predecessor. He could be willing to give up some draft capital and trade up in the draft for one big reason, other than getting a superior player: to make a statement. Trading up would show the fanbase that he´s different than the old regime, especially GM Rick Spielman.

But what does trading up actually cost? There are multiple charts to evaluate trades. I used the Rich Hill Model and looked at trades in recent years.

The Vikings Currently Own Eight Draft Picks in the 2022 Draft:

After Irv Smith Jr. went down with a knee injury during the last off-season, the Vikings traded their fourth-round pick away for tide end Chris Herndon. In retrospect, it was a genuine head-scratcher, as he only caught four passes in the whole season.

In the following scenarios, I only used the 2022 picks. The Vikings could obviously trade away future selections as well as players.

Trading up One Spot

Why would Kwesi Adofo-Mensah do that trade? Trades like this happen if the higher picking team is offering the selection to the highest bidder and the Vikings fear that a different team is trading up to get the Vikings’ number one choice. With that trade, they could secure their target. In this scenario, the trade is fair in the chart but probably will cost the Vikings more draft capital because the Commanders can sell to the highest bidder in a bidding war, and if the demand is high, the costs are high too.

Trading up to Pick 10

This trade happened in the 2021 draft. The Eagles traded picks 12 and 84 to the division rival, Dallas Cowboys, to secure the right to draft receiver DeVonta Smith. The Cowboys acquired additional draft capital worth 29 points via the trade chart.

Looking at the Vikings’ selections in the upcoming draft, it would probably cost the first and third-round pick (77) to trade up to the 10th spot. The pick is currently owned by the Jets, who was a trade partner for Rick Spielman in the 2021 draft and with Chris Herndon. Trades like this could happen for the same reason as the previously described trade. However, another possibility is that the Vikings expect that the Commanders would select the Vikings’ top choice at 11, so the Vikings try to jump the Commanders to get their guy.

The ninth selection could cost the same as the 10th pick. The reason for this trade, just like all trades from now on, is just to get a specific player. For example, if Sauce Gardner falls to pick nine and Kwesi Adofo-Mensah wants him, it costs him his third-round pick. Depending on the demand for the selection, it could cost additional late-round picks.

However, the eight selection could even cost the precious second-rounder. The Vikings might get a day three selection in return.

Trading up to Pick 7

In 2018, the Buffalo Bills traded up to pick seven in exchange for the 12th pick and two second-rounders, picks 53 and 56. Four years later, Josh Allen was definitely worth the trade.

The Vikings don´t have multiple second-rounders. However, the second-rounder is the 46th pick and therefore more valuable than the 53rd the Bills gave up. So it would probably cost the first three picks to move up to the seventh spot.

Trading up to Pick 6 or Higher

From now on, it´s not possible to trade up without giving up future picks. Just last season, the Dolphins traded up from the 12th spot to pick 6, to select the receiver, Jaylen Waddle. It cost them, in addition to the 12th overall pick in 2021, the first-round pick in 2022. It ended up as the 2022 15th overall pick.

A Big Splash in the Draft?

Kwesi Adofo-Mensah may want to make a splash in the draft. Trading up, especially just a few spots to get his top choice, is certainly possible. However, trading down and acquiring more draft capital is the more likely scenario.