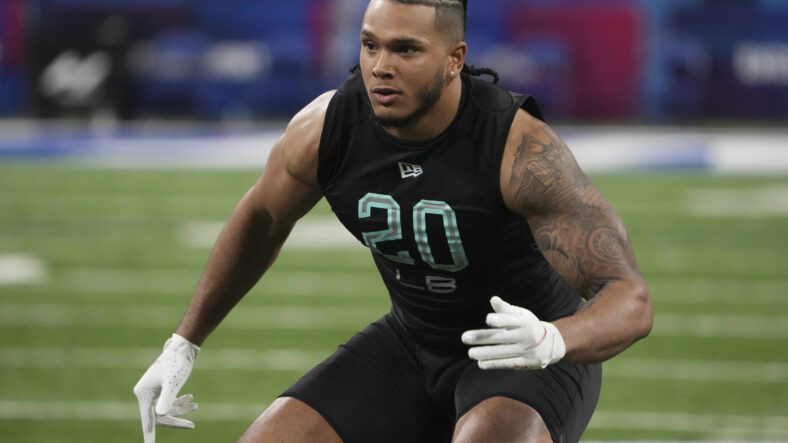 The Minnesota Vikings signed Za’Darius Smith as a counterpart to Danielle Hunter. The organization has two elite pass rushers, when healthy, and a lot of young developmental guys behind them.

For that reason, drafting an edge rusher is not the biggest need. On the other hand, drafting the best player available is always a good idea. New general manager Kwesi Adofo-Mensah should consider drafting a pass rusher early in the draft because this is a great class. All five players on the list are first-round talents and have the potential to become dominant players in the NFL.

Johnson grew up in Eden Prairie, Minnesota, and attended Eden Prairie High School. He certainly met the talent requirements to play Division I football but was academically ineligible after graduating with a GPA of 1.9.

His college career started at Independence Community College, while the college was featured in the third season of the Netflix documentary series “Last Chance U.” The freshman recorded 58 tackles, eight sacks, and three forced fumbles. His strong play earned him multiple offers from power-five schools, and he transferred to Georgia, where he spent both of his seasons with the Bulldogs but just as a rotational player.

For that reason, he transferred to Florida State, where he finally started and had an outstanding season. Johnson played the tenth most snaps of any edge player in the country. Not only the number of snaps was impressive, but the sack number as well, as he finished his last year of college eligibility with 14 sacks.

The former “Last Chance U” star does everything well. He doesn’t have a real weakness in his game. On the other hand, he doesn’t do anything on an elite level either.

Johnson’s size is prototypical for an NFL edge rusher. He’s 6’5″ and weighs 260 pounds, paired with long 34″ arms and a 4.58 40-yard dash. He mostly wins with speed. He’s a straight-line runner and lacks the agility to become an All-Pro level pass rusher, but he has the tools to make an early impact in the NFL and have a long and productive career.

Thibodeaux had a stellar career in high school, and since then, he has been viewed as “the next big thing.” The California native recorded 18 sacks and 54 tackles in his senior season and was named High School Defensive Player of the Year by USA Today. Overall, he finished his high school career with marvelous 54 sacks and was ranked as the top recruit in the country.

A lot of the top programs in the nation made him an offer. He chose to attend the University of Oregon, where he quickly became the star on campus. In his true freshman season, the pass rusher got ten sacks. Thibodeaux recorded three sacks in the pandemic-shortened 2020 season and nine in 2021, his last season in college. For most of his time in Oregon, he was viewed as the first overall pick in the 2022 NFL Draft, but his stock started to drop recently.

His biggest strength is his explosiveness. The get-off is elite and wins a lot of his pass rushes with speed around the edge. The bend is another elite part of his game. He is 6’4″ with 256 pounds and runs a 4.58, and has 34″ arms.

All of that sounds like Jermaine Johnson, and both are comparable players. The quickness of Thibodeaux gives him the edge, even if he does some things worse than Johnson.

His technique is flawed. If he doesn’t win with speed, he has a problem. He has to learn pass rush moves, including counter moves, because his repertoire isn´t large at the moment. His motor is a concern for some experts. It’s not elite but not poor either. He should be viewed as average in that regard. Against the run, he has to improve. He is not a liability, but he is too skilled not to be dominant at stopping the run.

If he can improve his technique, the league is in trouble. He will manage to get sacks early in his career due to his impressive speed, but to reach his potential and become a perennial double-digit sacks guy, he needs good coaching and has to be willing to improve because consistently winning with speed only won’t work in the NFL.

Yoros Karlaftis was born in Greece and lived there until he was 13. His mom and brothers moved to West Lafayette after his Dad passed away. Soon after the move, he changed his name to George and started playing football in high school, where he immediately was a superstar. He finished his high school career with 41 sacks.

Following his successful time in school, most powerhouses made him an offer, including Alabama, Clemson, and Ohio State. Despite their strong interest, he chose to stay at home to attend Purdue, which was just one mile away from his home.

In his freshman year, he was a true iron man. He played 843 snaps, the sixth most of any lineman in the country. Seventeen tackles for loss and eight and a half sacks were the result. After the pandemic-plagued season in 2020, he returned to dominance in his senior year. Ten tackles for loss and four and a half sacks resulted in a PFF grade of 87.2. His pass-rushing grade was even higher – 90.6. Some people point out his sack number as a negative. He frequently faced double teams and still found ways to impact the play.

His strength is his god-like power. The bull rush is a big part of his game, where he dominates opponents. In addition to that, he plays every snap with high energy. He only knows attacking and doesn’t take plays off. The motor paired with good hand usage makes him a good defender against the run.

Versatility is another strength of his. In a 3-4 defense, as the Vikings will play in 2022, he can play outside linebacker and defensive end.

He has to add some counter moves to his repertoire if the bull rush is picked up. At times he turns to an unorthodox power to speed move that could be special.

Against the run, he should be dominant. He is good but has to be more consistent to be special. He brings everything to the table to be an absolute force against running plays.

Karlaftis’ odds to be a top-ten selection in the draft are not great. He is +1500 to be one of the first ten picks in the draft. The Greek has the potential to be a steal in the draft.

Travon Walker was a late bloomer in the draft process. He was viewed as a mid-to-late first-round pick and now is considered by some as the top player in the draft.

The four-star recruit accepted the offer of Georgia over Alabama’s and Clemson’s. In his first two seasons on campus, Walker was a rotational player before he could lock down a starting spot in 2021.

The lack of sack production is often used against him. Indeed, he had just eleven sacks in three seasons. And it becomes obvious why that is the case when watching the film. He is playing the run first and the pass second. That’s not Walker-specific. It’s how all Georgia players operate. They are so talented on defense that they still get pressures this way, and running against them is impossible. He shows enough pass-rushing ability on tape to know that he can be really good at it.

His calling card is his insane athleticism. His test results are similar to Danielle Hunter’s in 2015, but Walker is 20 pounds heavier. He is 6’5″ and 272 pounds, has 98th percentile arm length, and runs 97th percentile 40-yard dash of 4.51. His three-cone time was impressive, too, as he just needed 6.89 seconds, 94th percentile.

The athleticism didn’t only show at the combine drills, but it shows on tape, too. His explosiveness is impressive, paired with elite power. He is a remarkably strong player who handles guards and tackles with ease.

Walker is the most versatile player on the list. He is quick enough to play outside and strong enough to play inside. In addition to that, he can cover, even if that’s a waste of his talent, to use him that way.

His pass rush moves are at an average level. He has to improve in that area. It’s his only weakness.

He has the power of Karlaftis and the explosiveness of Thibodeaux. Walker has incredible potential and is not as big of a project as many people believe. Once he gets the opportunity to rush the passer more often, he will be dominant. Walker is a worthy second overall pick if the Lions choose to go that route.

Born in Plymouth, Michigan, it was the logical consequence that Hutchinson became a Wolverine. The top-ranked recruit of Michigan committed to the University of Michigan, where he spent all of his four college seasons.

He managed to make 15 tackles as a true freshman before earning a starting spot in advance of his sophomore year. He played as an interior defensive lineman and recorded 68 tackles and four and a half sacks. In his junior campaign, Hutchinson broke his leg and appeared just in three games.

As a senior, the Michigan native became one of the most dominant players in the country, leading Jim Harbaugh’s Wolverines to the CFB playoffs and a Big-10 championship. Hutchinson lost 20 pounds in his lost junior season and was ready to play outside. He received multiple awards on his way to a 14-sack campaign, a team record. His PFF grade of 94.5 is absolutely elite.

He wins with explosiveness, power, and high energy. His game is flawless. He wins in all different ways, with the speed rush and the power rush. He is elite against the run, as his PFF run-defense grade of 90.8 shows. His three-cone drill at the combine was one for the ages, as he finished the drill in just 6.73 seconds.

Short arms are the only concern, as they are just 32.13″. He was still able to dominate offensive tackles at will.

Aiden Hutchinson is a near-perfect prospect. He is why the sentence “There are no elite players in this draft class” is wrong. He is an elite player and would be the top pick in numerous other classes. His high energy and high-level play have the potential to change the culture of a franchise. Therefore, Hutchinson makes a lot of sense to become another franchise cornerstone of the Jacksonville Jaguars, who hold the first overall pick. Trevor Lawrence and Aiden Hutchinson could be the foundational pieces of a bright Jaguars’ future.