The Top 10 Vikings Draft Picks of the Last 10 Years 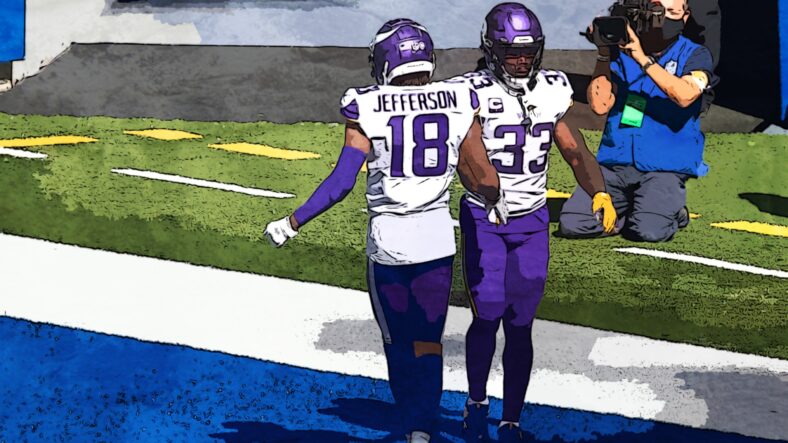 Twelve men drafted by the Minnesota Vikings in the last 10 years have reached Pro Bowls. Even Matt Kalil made it, if that can be believed.

While the Vikings were unabashedly a defense-first team for most of the last decade, general manager Rick Spielman still managed to fortify the depth chart with premium offensive talent.

Dating back to the 2012 NFL Draft, comprising 10 drafts, these are the Top 10 Vikings draft picks of the last 10 years.

Note: The analysis does account for players’ performance on other teams.

O’Neill is lionized for one reason. He stabilized the Vikings offensive line — sort of — at a time when the offensive trenches desperately needed someone to do so.

The Pittsburgh alumnus was that guy, thrust into action “prematurely” in 2018 after an injury to his predecessor. O’Neill has tallied a 70.0+ grade from Pro Football Focus in each of the last three seasons, almost a Holy Grail for Vikings offensive line desires.

He’s handsomely paid now, too. In 2021, O’Neill signed a $92 million deal with Minnesota over the next five seasons (well, through 2026). Then, he was nominated for his first Pro Bowl.

Rhodes stayed with the Vikings until the infamous mass defensive exodus of 2020 when Rhodes, Everson Griffen, Trae Waynes, Linval Joseph, and Mackensie Alexander all skedaddled.

All told, Rhodes has achieved three Pro Bowls and one First-Team All-Pro accolade. Although, one of the Pro Bowl selections was a sham (2019 with a 46.4 PFF score).

The Vikings didn’t unlock his full slate of utensils, but the New England Patriots, Chicago Bears, and Atlanta Falcons sure did.

Patterson was an underwhelming wide receiver — the Vikings drafted him as a true-blue WR — but the Tennessee Volunteer instead plotted a possible path to the Hall of Fame via returning kicks.

He is tied for the most kick-return touchdowns of all time (8) as of April 2022. It would be a farce to leave him off the list or discount the full heft of his resume.

Patterson is a four-time Pro Bowler.

The first pick of the Mike Zimmer era, Barr wiggled into four Pro Bowls while starting 98 games in Minnesota. He is currently a free agent and unlikely to rejoin the 2022 team, but if he’s healthy, another team will scoop Barr for the middle of its defense.

Barr symbolized the Zimmer era, a period rampant with defense, defense, and more defense. In 2021, Barr orchestrated some incredible plays, chiefly against the Baltimore Ravens and Los Angeles Rams.

But the Vikings, true to form last year, found a way to squander those mini-masterpieces.

Depending on the beholder, Cook is currently a Top 3 or Top 5 running back in the NFL.

If he hadn’t missed 31% of all football games since entering the league, he’d careen up this list. On the whole, though, Cook took over for the legendary Adrian Peterson, who left the Vikings just before Cook was drafted.

Cook has since scored 42 touchdowns on 6,319 yards from scrimmage en route to three Pro Bowls.

The Vikings have employed a Peterson or Cook on the roster since 2007. What a streak.

Hunter has missed 81% of games inside the last two seasons. Otherwise, he’d be #3 on this list. But production and value only tabulate when on the field.

The LSU is a dominant pass rusher, found in the 3rd Round of the Vikings epic 2015 NFL Draft by Spielman. He accrued more sacks by the age of 25 than any human ever.

Now, he’ll pair with Za’Darius Smith in 2022 as both men seek to rectify recent injury histories.

Strangely, Hunter has been voted to just two Pro Bowls.

Kendricks outranks Hunter because he is generally healthier. He was also a First-Team All-Pro contestant from the 2019 season, a feat not yet accomplished by Hunter.

He began his career as a reasonable contributor in Zimmer’s defense and then gradually ascended to superstardom around 2018-2019. Kendricks encountered a “down year” in 2021 but will be back in Ed Donatell’s new-look 3-4 defense this autumn.

For 3 to 4 seasons, Kendricks has been the cardiovascular system of the Vikings defense.

Jefferson was drafted two years ago, catching more receiving yards than any football player in his first two seasons in NFL history. His career is still blossoming — the man is still only 22 years old — but his impact on the Vikings and league is irrersivslble.

A two-time Pro Bowler already, Jefferson took over Stefon Diggs, who forced his way onto the Buffalo Bills roster two years ago. Somehow, the Vikings didn’t miss a beat at WR, replacing Diggs with Jefferson after some fancy draft scouting in the spring of 2020.

Around this time next year, Jefferson will command a contract around $35 million per season. His thumbprint on the Vikings is undeniable, easing the pain of Diggs’ departure.

Smith would be the top dog on this list — if he wasn’t a 1st-Rounder.

Minnesota found Smith in the 2012 NFL Draft before Mike Zimmer was anywhere near the franchise. Little did Rick Spielman know that Smith and Zimmer would blend superbly.

Diggs gets the nod over Harrison Smith for one reason only — value.

Smith has played longer and hence documented more production. But Diggs is every general manager’s dream — a gem from the lower rounds.

Diggs was underutilized by Zimmer’s run-happy offense, so he tweeted his way to the AFC East. There, he ranks fourth in receiving yards leaguewide since his arrival behind Justin Jefferson, Davante Adams, and Cooper Kupp.

He was recently paid a top-tier contract by the Buffalo Bills, and he deserved it. Diggs has been to two Pro Bowls and has one First-Team All-Pro distinction on his resume.

Smith was a 1st-Rounder. Diggs was a 5th. Advantage Diggs for these “best draft pick” purposes.