The 2 Players to Monitor if Vikings Trade Up 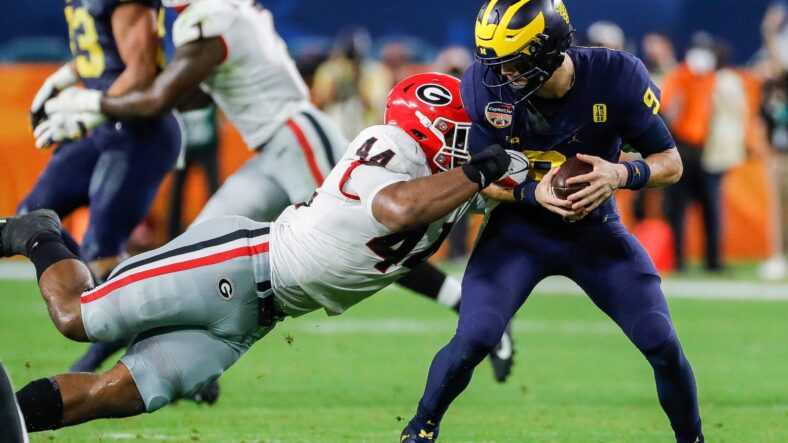 While the possibility of the Minnesota Vikings trading up – rather than down – in the 1st Round of the 2022 NFL Draft is slim, two players are tapped as “the guys” targeted for the hypothetical strategy.

Minnesota almost certainly wouldn’t sell the farm to enter the Top-3 fray, but if Travon Walker or Ahmad Gardner were available near picks 8, 9, or 10, new general manager Kwesi Adofo-Mensah might wheel and deal, according to Chad Graff from The Athletic.

The Vikings will be focused on defense early in the draft, per draft pundits, and adding Walker or Garnder would be considered a homerun. Trading up the draft board was not a popular sentiment or prediction until last week when KFAN‘s Paul Allen mentioned the idea on his radio show and in this tweet.

Still, Minnesota is more likely to trade down, accumulating extra draft capital rather than donating it for a single player. It’s why players like Trent McDuffie and Andrew Booth Jr. are oft-mentioned as linked to the Vikings because Adofo-Mensah could do two things – land a franchise CB1 and gain an additional draft pick in the 2nd Round or so. After that, the Vikings would have their choice for an extra linebacker, safety, wide receiver, etc. – all spots the team could stand to get a little deeper.

Why Walker and Garnder? Well, Walker, for now, is favored by oddsmakers as the #1 overall pick in the damn draft. If his tumble began and reached the eighth pick, it might be too enticing for the Vikings to let the man continue a draft descent.

On Gardner, he considers himself the best player in the draft – he even announced it – and draft brains classify the Cincinnati alumnus as the best overall cornerback from the class. So, with both men, Adofo-Mensah would theoretically trade draft capital for men known as the best at their respective position.

Remember, though, the trade-up fodder is recent and unlikely to materialize. Since hired by the Vikings, Adofo-Mensah frames his analytical approach to football based on value. And it just seems odds that he would relinquish one or two picks for one tantalizing prospect. His former coworker in Cleveland, Andrew Berry, didn’t do a lot of that, so it’s not like there is a credible association for the idea.

Yet, if he does pull the trigger upward, Walker and Gardner are the men to watch, per The Athletic.

If the pick by the Vikings is Walker, it will be especially noteworthy because the Vikings haven’t drafted a 1st-Round EDGE rusher since 2005. Yes, 17 years.