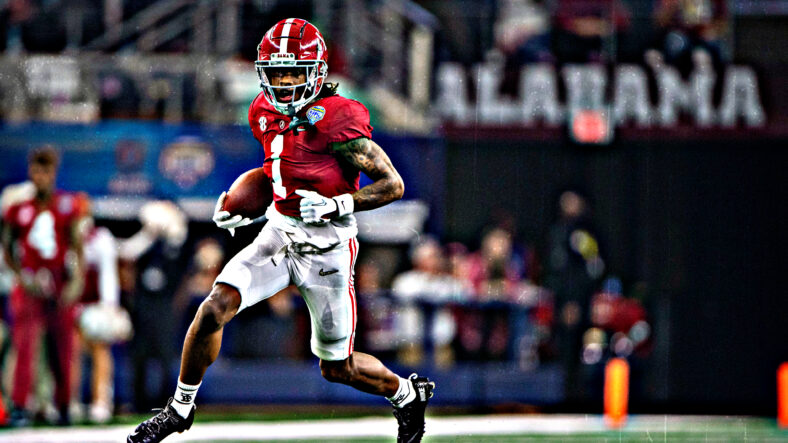 Marco Pavoloni runs a Substack venture devoted solely to NFL draft content. Each year, he compiles every draft rumor and breadcrumb — like every single one — culminating in a system to predict draft outcomes, one he champions for accuracy.

The 2022 NFL Draft begins on Thursday night, and Pavoloni released his final Rumor Mill Mock Draft, a climax of his rumor tracking.

His enterprise is righteous, donating earnings to Down Syndrome research.

For the Vikings, he envisions first-year general manager Kwesi Adofo-Mensah bucking the glaring team need for defense in favor of a wide receiver — Jameson Williams of Alabama.

With a mountain of evidence, Pavoloni noted on Williams to the Vikings, “I’ll reiterate that this pick could go in any direction, but it’s not hard to imagine that an innovative front office would want to give a first-year offensive-minded head coach a boost as a welcome gift.”

Interestingly, when asked about any potential “shocker” decision by Adofo-Mensah on draft, ESPN’s Jordan Reid echoed the same sentiment. Reid, too, seemed convinced the Vikings could draft Williams, stating as such on VikesNow earlier this week.

That’s not all. NFL.com‘s Bucky Brooks authored his final mock draft, too, sending Williams to the Vikings with the 12th overall pick. Brooks explained, “Adding the Alabama standout would give the Vikings a dynamic three-receiver package; Williams could eventually replace Adam Thielen in a year or two, when his salary-cap number becomes unmanageable.”

Williams would create an embarrassment of riches for the Vikings, outfitting this playmaking depth chart:

And for many, that bunch would be mouthwatering, especially for a group under the tutelage of Kevin O’Connell, who just offensively coordinated the Los Angeles Rams to a Super Bowl title 2.5 months ago.

The only catch? Fans may need patience. Williams tore his ACL in the 2022 National Championship loss to the Georgia Bulldogs. While recovery from that injury seems to occur at warp speed in the modern NFL, Williams would need 7-9 months to fully heal. On the latter side of the prognosis, that makes him available to the Vikings offense sometime in October.

Pavoloni explained his mock draft procedure performs “insanely well against expert mocks” and would rank “in 17th place among all industry expert submissions (out of 133).”