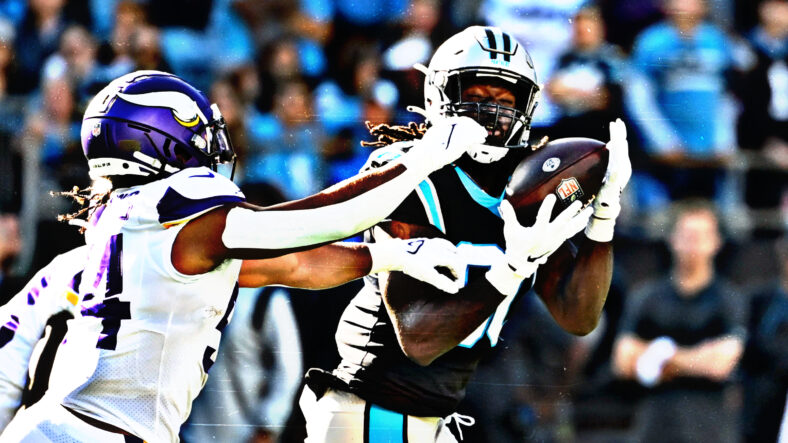 Teddy Bridgewater, Sam Darnold, Cam Newton, and P.J. Walker have started games at quarterback for the Carolina Panthers in the last two seasons. None of those men are considered sure-fire QB1s for the 2022 season, so Carolina will likely draft a quarterback in Thursday’s draft with the sixth overall pick, right?

Not necessarily — and Carolina drafting a non-QB could mess with the Minnesota Vikings draft plans.

Gone are the days when NFL teams limp into a season with a half-measured solution at QB1. Therefore, the Panthers were whispered to be in the market for a passer like Malik Willis or Kenny Pickett in this draft. They’ve also indicated initial hesitation to trade for Baker Mayfield, one of the “hot” candidates to play elsewhere in 2022, as Cleveland traded the farm for the embattled Deshaun Watson. Mayfield is an NFL orphan for now.

So, something’s gotta give. Will the Panthers really audition Sam Darnold again? His 2021 campaign was forgettable. Probably not. Yet, one of three options will occur for Carolina heading into September:

On the Monday before the draft, NFL Network‘s Bridget Condon reported the Panthers are “are unlikely to use their No. 6 overall pick to draft a quarterback.”

Either that is typical pre-draft smoke, or the Panthers will choose steps two or three of the aforementioned plan.

Their choice directly affects the Vikings, who draft six selections after Carolina. While draft pundits haven’t been married to a QB for the Panthers in unison, the likelihood of general manager Scott Fitterer choosing one is reasonable. And when teams ahead of the Vikings in the draft order “reach” for quarterbacks in this draft, it is glorious news for Minnesota, shoving blue-chip, non-QB talents further down the draft board.

If Carolina does not pick Willis or Pickett, they’ll conform to conventional draft logic, selecting an offensive tackle, cornerback, or EDGE rusher — and the Vikings covet the latter two positions at #12.

Overall, this is the nature of the beast leading up to a draft. Hype, lies, and misdirection. However, it was a relatively safe bet that Carolina would be one of the usual suspects to reach for a quarterback.

For now, it appears the franchise will not, and players like Kyle Hamilton or Derek Stingley Jr. are thus unlikely to tumble down toward the Vikings selection.