Notable Numbers Leading Up To The Vikings’ Draft 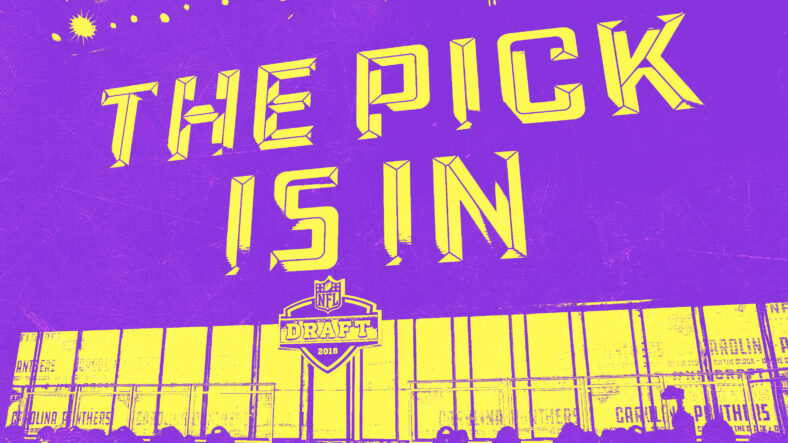 The draft is this week, folks. After all the mocks and prophecy, we’ll soon know what the Minnesota Vikings actually decide to do in the draft.

For this reason, I’m offering up a piece to remind readers of some important numbers to remember. This can be anything from statistics to draft trends, the current roster to the age of players. Hopefully, you’ll have a better understanding of where the Vikings have been and currently are. From there, we may catch a glimpse of where the Minnesota Vikings are going on draft night.

A shout out to Pro Football Reference. Let’s get to the numbers.

This was the last time the Vikings opted for a RD1 defensive end. Now, we should add a little nuance to our assessment of this year’s pick. If the team decides to bring in an OLB whose primary function is to rush the passer, then I think we can say that the curse has been broken. The dry spell ended in 2022 since a 3-4 OLB fills a near identical role to defensive ends. Regardless, it has been a long time.

The ages of Minnesota’s two starting edge rushers: Danielle Hunter and Za’Darius Smith. Neither belong in an old folks home, and yet neither are young. Both will need to find rest throughout the gruelling 17-game schedule.

That’s Cameron Dantzler’s PFF score from last season. It puts him at 17th-best among qualifying corners. In other words, PFF suggests that Dantzler is a tier-1 NFL corner. What do the Vikings think of their third-year player from Mississippi State? If they’re confident he’s actually a CB1, then maybe the emphasis on opting for a RD1 corner is a little less prominent.

Minnesota has chosen 3 first-round corners since 2015. None of them remain on the team. Trae Waynes is a free agent, Mike Hughes is now in Detroit, and Jeff Gladney is with the Cardinals.

It looks like the Vikings have four players competing for the RG spot: Oli Udoh, Jesse Davis, Chris Reed, and Wyatt Davis. Might a Day 2 selection bump that number higher? There has been a little chatter about this precise possibility on Purple PTSD.

The last time the Vikings didn’t take a linebacker was in 2008. Currently, Minnesota has two strong, albeit older starters at linebacker: Eric Kendricks and Jordan Hicks. From there, it’s a lot of young, unproven depth. I know there’s a new leadership group, but I’m expecting the run on LBs to continue for another year.

Over the past three years, the Vikings have chosen 8 players in the seventh round. They didn’t have a seventh-round pick in last year’s draft.

The Vikings have chosen 4 defensive ends in the last two years: D.J. Wonnum, Kenny Willekes, Patrick Jones II, and Janarius Robinson. One of them needs to step up in 2022. It’s plausible one or more don’t make the team.

Minnesota has made 38 selections over the past three years. The main consequence of the Kirk Cousins contract(s) is not that the team hasn’t been able to put high-end players around him. Rather, it’s that there hasn’t been enough money to retain middle class players. The strategy has thus involved bringing in tons of rookies to balance the books. In 2022, Cousins will account for 15% of the Vikings’ salary cap.