Making the Case against the Vikings Drafting Derek Stingley Jr. 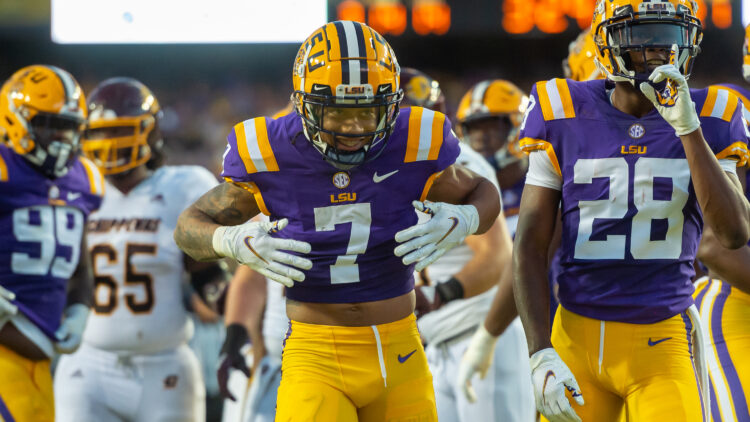 Derek Stingley Jr. has been viewed as a top-10 pick since starring on the 2019 national champions LSU as a freshman. Draftkings.com set the line of his draft position at 12.5. Exactly where the Vikings pick. There are some good reasons for him falling in the draft, and it’s even possible that he falls even further.

After his freshman year, the former Tiger only appeared in ten games over the last two seasons of his college career. In 2020, the prospect missed three games. He didn’t play in the season opener due to an illness and missed the final two games with an ankle injury. In his junior season, Stingley suffered a lisfranc injury in preseason practices and played in the first three games of the season. However, the cornerback re-aggravated his injury leading up to the fourth game. After having surgery on September 26th, he missed the remainder of the season, including the draft combine.

Isolated, these injuries look like coincidences, but it happening twice could be the beginning of a pattern. If a prospect misses games in back-to-back years with injuries, including a major injury like a broken foot that requires surgery, he can be viewed as injury-prone.

Without any doubt, his freshman season was something special. Stingley Jr. was named consensus All-American and won the national championship as a teammate of Vikings’ star receiver Justin Jefferson. When he was targeted, Stingley only allowed a completion percentage of 38.3 and had six interceptions. Opposing quarterbacks tested him a lot and had some success, as they recorded five touchdowns against him. Overall, the passer rating on his targets was below 53 in his first season.

After his unbelievable season, his play declined, and his PFF grades show the struggles:

The sample sizes were not as big as his freshman campaign, but it’s still very concerning. He was targeted less yet allowed a higher completion percentage and two touchdowns without interceptions. The result was a passer rating allowed of 86.6.

Is He the Best Player Available?

The former LSU standout might be a good prospect but might not be the best player available. Teams should habitually select the best player on the board without looking too much at the roster needs.

Barring a trade, only 11 players will be off the board when the Vikings are on the clock. Often associated with the 12th overall pick is Georgia defensive tackle Jordan Davis. Notre Dame safety Kyle Hamilton could fall in the draft after his struggles at the combine. The value of his position could lead teams to look somewhere else, too. Some of the top wide receivers, like Alabama’s Jameson Williams and Ohio State’s Garrett Wilson, will be available.

The Vikings could look again at the offensive line and have their eyes set on highly touted center Tyler Linderbaum. Oregon´s pass rusher Thibodeaux is rumored to tumble down draft boards as well. No matter who is going to be selected before the Vikings are on the clock, there are going to be some elite talents on the board.

It’s impossible to figure out how teams grade the players. It’s certainly possible that fans are much higher on Derek Stingley Jr. than the team is. The Vikings’ scouting department might even have Washington cornerback Trent McDuffie higher on their board. They are certainly closer to each other than fans think.

The draft is going to take place on April 28th. It will be the first pick of new General Manager Kwesi Adofo-Mensah. There’s a good chance that he wants to acquire a player with a high floor in the process, as his first selection will forever be associated with his name. Derek Stingley Jr. has too many question marks to fit that description. A safe pick is someone with fewer concerns.

Another Moneyball-like approach is trading down in the draft. Drafting a player later in the first round while acquiring more draft capital is a strategy that would fit perfectly the “analytics-driven approach” Adofo-Mensah is supposedly using. Bringing in as many talented players as possible is his goal. Through trading back, he gains additional selections to do just that.

Derek Stingley Jr. could certainly become the newest member of the Minnesota Vikings on April 28th, but there are reasons why he should not be a Viking. If Kwesi Adofo-Mensah chooses to go a different route, the team’s supporters should not lose their minds, as there are question marks, and the front office knows much more about the players than we do.