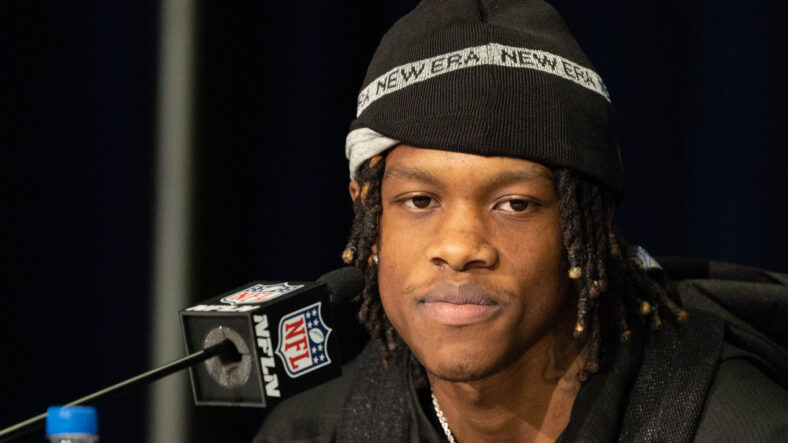 Pro Football Focus published a final mock draft, and at pick 12, it’s Jameson Williams for the Vikings. To be honest, wide receiver hasn’t been on my radar at all. In my recent mock draft, I didn’t take one at any point.

People see things differently and see preparing for life after Adam Thielen as a priority. There’s a lot of sense to that. Maybe my fandom of Ihmir Smith-Marsette is clouding my judgment, but I think the Vikings are set at wide receiver. If anything, I believe, and I have been vocal about this, the Vikings need a big physical pass-catching threat, whether that be from the receiver position or at tight end.

Of course, there is the argument for taking the best player available, something I champion myself. In this draft, Kyle Hamilton is still on the board, later taken at pick 13 by the Houston Texans. Give me the choice between Williams and Hamilton, and I’m taking Hamilton every time, but that’s just my opinion. In this draft, the Vikings take Jameson Williams at 12.

An important thing to note is what writer Austin Gayle says before going into his draft:

“This is the only mock I’ll write for the 2022 NFL Draft where I will highlight what I think will happen with all 32 picks and not what I’d do as the general manager for the selecting teams.“

So, Gayle thinks the Vikings would choose Williams over Hamilton. So, here’s what you need to know and what Gayle has to say about the potential new wide receiver for the Minnesota Vikings.

“Minnesota is one of the best landing spots for Alabama wideout Jameson Williams. With Adam Thielen and Justin Jefferson still leading receiving corps, the Vikings don’t need to rush Williams back from the torn ACL he suffered in the College Football Playoff National Championship on Jan. 10, 2022. And if Williams didn’t get hurt in that game, I’m of the opinion that he’d be the consensus WR1 in the 2022 class. His speed and movement skills are a tier above any other pass-catcher entering this year’s draft, and he’s still just scratching the surface on his route-running technique having just one season with more than 20 targets under his belt.“

If the Vikings did go this way, I wouldn’t be upset. The defense is a priority for this draft, and I wouldn’t like to pass on Kyle Hamilton. However, there is no doubt that Jameson Williams is an extremely talented player. The prospect of him in tandem with Justin Jefferson is indeed a mouth-watering one, backed up by KJ Osborn and Ihmir Smith-Marsette.

It is indeed a possible outcome but just one of many. Even this close, this year’s draft feels especially difficult to predict. For PFF’s final attempt at prediction, it’s Williams for the Vikings.