Everybody Relax: Beginning Kwesi Adofo-Mensah Era Was a Success 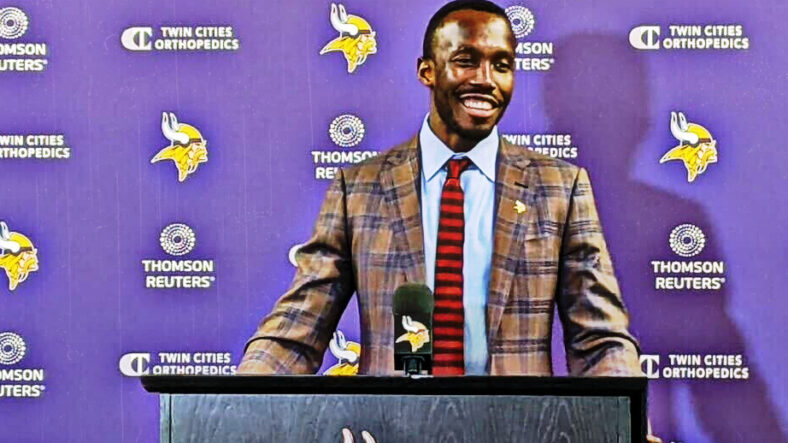 Kwesi Adofo-Mensah just made his first big-time move as the general manager of the Minnesota Vikings, and the entire fanbase was already expressing trepidation.

Adofo-Mensah knows what he’s doing, and the front office has a plan in place. Everyone just needs to relax and trust the process and let everything play out. Today was a successful day for the Minnesota Vikings new era of football.

The board was aligning perfectly for Minnesota, and they had a chance to land either safety Kyle Hamilton or wide receiver Jameson Williams, but Adofo-Mensah had other plans and surprisingly decided to trade down 20 spots in the draft all the way to 32nd overall.

Minnesota moved back and unexpectedly traded with their division foe, the Detroit Lions. Adofo-Mensah netted picks 32, 34, and 66 from Brad Holmes for 12 and 46. The trade was unconventional because typically, if a team moves back 20 spots, they shouldn’t have to attach their second-round pick, especially if a future first isn’t included in the deal.

After the trade was finalized, Minnesota focused their attention on their next move after securing four top 80 picks with plenty of talent on the board. Many thought Liberty quarterback Malik Willis could be in play at 32, but the Vikings opted to go with Georgia safety Lewis Cine to conclude the first round of the 2022 NFL Draft.

Lewis Cine was projected to go much sooner, and many experts actually thought he was the best safety in the entire draft class. He’s coming off a National Championship victory against Alabama and was a part of arguably the best defense in college football history.

“People think of me as just a hitter, (but) I see myself as an all-around playmaker,” Cine said “I show up when I’m needed, and I’m always around the ball. I think that I’m a smart player. I can get guys lined up. When guys are wrong, I can make them right. I have range, I’m fast, and I can come from top-down extremely fast.”

He fits a lot of measurables that Ed Donatell is looking for and is the perfect compliment to safety Harrison Smith.

If I told you 24 hours ago that Minnesota would have secured Lewis Cine in round one and entered day two with picks 34, 66, and 77, most would think that’s a pretty good day, right?

I understand trading away pick 46 in the deal was a hard pill to swallow, but in a way, pick 34 is just like another first-round pick since it’s literally the second pick of round two.

Minnesota also received pick 66, which is the second pick of the third round as well, so there is still a lot of talent on the board, and Adofo-Mensah still got an impactful starter at 32.

The Vikings can trade back at pick 34 to potentially acquire even more draft capital, especially since Willis is somehow still on the board, with Seattle, Atlanta, and Indianapolis needing a quarterback of the future.

The draft is far from over, and Adofo-Mensah has plenty of ammunition to move up and down the draft board if he decides to do so. Everyone just needs to take a deep breath and just let things play out before crucifying a first-year general manager’s first-ever trade and draft selection.

The fanbase, for now, should just stay patient and trust the process. It’s a new era of Vikings football with Kwesi Adofo-Mensah and Kevin O’Connell calling the shots.