Draft Prospect Could Be Coming Home 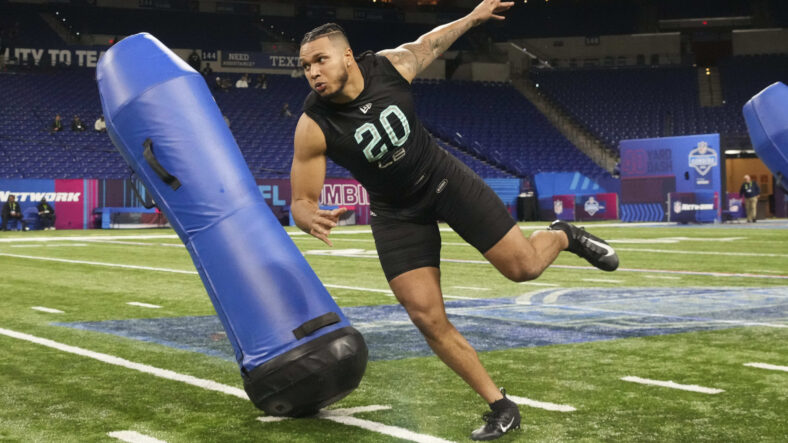 With one week before the NFL Draft kicks off, teams are full steam ahead. This is the last week that the Vikings have to evaluate their draft prospects. One of those draft prospects could be coming home.

Jermaine Johnson II has been linked to the Minnesota Vikings. Peter Schrager tweeted this yesterday:

Although, Schrager is the first national TV personality to link Johnson with the Vikings. However, it could be a match made in heaven. Well, at least it would give us another hometown kid to root for. What is not to love about that?

Jermaine Johnson’s journey to the NFL Draft is not like many potential first-round picks. He grew up in Eden Prairie and went on to play football at Independence Community College. From there, he was featured on “Last Chance U” and eventually became a standout.

He transferred to Georgia, where he played as a reserve pass rusher. Although, after a limited role there, he transferred to Florida State. In the 2021 season, Johnson exploded onto the scene. He became the ACC Defensive Player of the Year and first-team all-conference.

One could say that he is good at football.

When Will This Draft Prospect be Taken?

Back in February, I started evaluating some players who could be potential draft picks for the Vikings. At the time, the Vikings were without Za’Darius Smith. Also, Danielle Hunter’s contract was still in flux, and rumors of him being traded were floating.

So, once I came across him, I thought the Vikings should absolutely trade him. There is a chance he is the best defensive end in the entire draft.

At the time I was looking at him, he was projected to be a late first-round or early second-round pick. However, now he is projected to be early to mid-first round. Although, the betting markets indicate to know something we don’t:

A 15% probability to be drafted by the Jets at 4th overall is pretty significant for the Vikings. If the Jets selected him, Ahmad Gardner could fall further down the board. Although, that seems unlikely to happen. If it did, trading up to get Gardner becomes a real possibility.

However, selecting Jermaine Johnson II with the 12th overall pick is not a crazy thing to consider. We know the Vikings need corners, but they need defensive ends as well. Sure, they have Danielle Hunter and Za’Darius Smith, but for how long?

Both of these players have an injury history that is a bit scary. Any time there is a back injury, you have to think an aggravation could occur at any time. On top of that, the Vikings don’t have any quality depth behind them.

Adding a guy like Jermaine Johnson II would alleviate the concern of injuries. And to be honest, even if there wasn’t an injury concern, is there such a thing as too much quality depth? No.

If the Vikings select Jermaine Johnson, I would be pretty happy with that.